For Christmas this year, I had a certain scarf project that meant a lot to me.  I'll try not to get too Debbie Downer on you, but I do want to share the story behind this scarf.  My much-loved grandfather passed away this Christmas (December 21st, actually) at the age of 90.  While it was not entirely unexpected, it definitely hit hard and I felt lucky to have most of my family so close by so we could spend the holiday together and sharing warm memories about Grandpa.  Not too long ago, my mom had helped Grandpa do a bunch of cleaning and organizing in his apartment, and she brought me several of his nice sweaters to work with.  I turned one of them into this sweet sweater for my boy, and another into this snuggly cowl for my dear friend.  That left me one more, and when Grandpa passed, I knew that I wanted to use it to make a gift for Winnie, Grandpa's companion for the last 10 years and his saving grace.  The cashmere sweater is a lovely blue color that matched Grandpa's eyes.  They stood out so brightly whenever he wore blue, which he did often.

Now, I have been using most of my sweaters to make infinity scarves, but I couldn't really picture the 93-year-old Winnie wearing one of those.  So I thought I'd go traditional.  But this blue sweater with a subtle cable was very masculine, and I wanted to give it a feminine embellishment.  I came up with the idea of adding ruffles down the sides of the scarf. 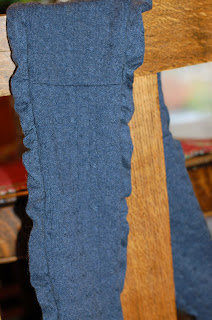 Have you seen this tutorial for making ruffles?  Well, I've tried this before on thin knits and woven fabrics with very little luck.  But I thought I'd give it a go on this project, and what do you know?  It worked like a charm!   I don't know if the thicker fabric was the key, but hey, I'll take it.  I did recently discover this tutorial though, and I think I'll try it the next time I need a ruffle.  It seems more consistent to me.

I was in a bit of a hurry as I made this scarf, so I didn't take pictures as I went.  If I make another someday, I will update this post with how-to photos, but for now I will just talk you through it the best I can.  Hopefully the photos of the finished product will help you see what I mean!  Just think of this post as inspirational, rather than tutorial.

I sewed the 7-inch wide strips together end to end so that I had two strips that were each 7 inches wide and 60 inches long.

Then I made my ruffles.

I cut enough pieces out of the sleeves to make two long strips.  After joining the pieces end to end, each strip was 2.5 inches wide and about 90 inches long.

I started with one of the narrow strips and folded it in half, wrong sides together (I would not be turning it inside out.)  I set the tension on my sewing machine as high as it would go (9, on my machine) and set the stitch to the longest length.  Then I sewed down the open edge of the folded strip, leaving about a half inch seam allowance.  The fabric ruffled itself right up--not too tight, which was good--I had to do very little adjusting (by pulling the bobbin thread and shifting the ruffles) when it was done.

Then I laid the other piece of the scarf, right-side-down, on top.  I pinned all along the edge where I had lined up the ruffle so that the ruffle would stay in place between the two sides of the scarf.

Then I made the other ruffle the same way, lined it up along the other side of the right-side-up scarf, then laid the top piece back down and pinned the other side.

Once everything was pinned, I adjusted my sewing machine again (I usually have my tension around 4 or 5, and my stitch length at about 3) and sewed down the length of both sides, making sure to catch the edges of the ruffle all the way down.  I didn't want the seam I made when ruffling the fabric to show, so I used a wider seam allowance than I usually do--more like 3/4 of an inch.

I left both ends of the scarf open.

Once sewn, I turned the scarf right-side-out. 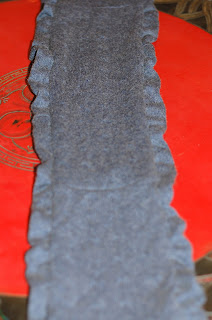 You could, at this point, follow these directions for closing up the scarf to turn it into an infinity scarf.  However, I just folded my ends in and sewed a seam across the bottom on both ends.

Here's how it came out--I'm pretty happy with it.  It's like a hug from my grandpa.

I hope that it doesn't make Winnie too sad.
Posted by bethanycavanaugh@gmail.com at 9:12 PM