This is my first holiday season as a blogger, and man, it has been harder than I expected to keep up!  I am trying to make the majority of my holiday gifts this year, and I often don't want to slow down the process to take photos of each step.  Luckily, I am mostly just following tutorials, so I can give you links to someone else's carefully documented project and just show you my results!

My boy's preschool does a hat and mitten drive every winter, and when I saw the tutorial for this fleece hat, I thought it would be perfect!  (I love Made By Rae's tutorials--I have made several things from her blog!  Poke around over there!)  I found a bunch of fleece on the remnant rack at Joann's Fabrics (and fleece was already 50% off, so I was paying somewhere in the neighborhood of $1-3 a yard).  I got some patterned and some plain, and last night I got going on it.  I spent less than $10, and probably have enough to make 6-8 hats.

My first two hats ended up being baby hats.  Which was kind of on purpose.  I started out making them bigger, but then I misread a part of the directions so had to cut a bit of the fabric off and start over, making smaller hats.  Which is fine, but I think I will probably make a few more so I can donate some kid-sized hats as well.  They were EASY, you guys.  It took me about 45 minutes to make the first two, fixing mistakes and all, and now that I have the hang of it I could make them even faster.  This is why I no longer knit.

Plus, when I made my kids put them on so I could take pictures (even though they are too small for both of them--a smidge for the girl, and a LOT for the boy), they both want some for their own now.  This pretty much happens whenever I make something for someone else.


A few notes on the tutorial--
1.  I think (I'm still not totally clear) that the writer intends for you to cut the rectangle for the outside of the hat in two pieces, OR cut it on the fold.  Because it was late at night and I didn't have my head screwed on, I ended up cutting only one earflap right in the middle of my big rectangle, which...duh, isn't how it's supposed to be.  I liked cutting only one big piece, but I put the seam in the back rather than in the front (what is pictured in the tutorial) because I was using patterned fleece and my pattern didn't line up.

2.  Still not sure if I was doing something wrong, but I ended up cutting a good 4-5 inches of fabric off the top of the hat before cutting my pom-pom strips.  Next time I will not add the extra 3 inches to the height, it doesn't seem to need it.  EDITED---I am an idiot.  I missed where she said "divide by two" (which explains my confusion in number one above)--and adding the 3 inches to the height happens AFTER you have divided the width measurement by two.  So instead of making a rectangle that is 20 inches (my kid's head circumference) by 23 inches, I should be making two rectangles that are 10 by 13 out of each color (or one that is 20 by 13).   This would have saved me so much fabric.

3.  When cutting the strips for the pom-pom at the top, I cut the seam out altogether.  I just thought it was a little bulky in there with all the other little strips.

ALSO, I had a birthday last month, and I just thought I'd share this crafty gift I got from my friend over at Cakes on a Plane because it's such a great gift!  So not only am I lucky to have gotten it, but it might be something you'd like to make for a friend or loved one this holiday season.  Love it! 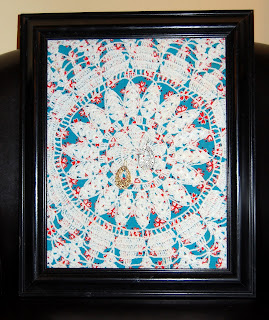 In case it's not clear from the picture, it's a lovely piece of vintage fabric with a crocheted doily over the top of it, both held in place by a picture frame.  You hang your earrings on the doily!  So great.  We are currently doing a master bedroom renovation that when finished includes a SWEET walk-in-closet with a vanity, and I cannot wait to get my jewelry on display in there with this!  Thanks Jilly!