I'm so excited for a new season of Project Run and Play!  I will definitely be sewing along for at least some of the weeks, including the first one, '80s cartoon theme!

I had a few ideas right off the bat for an outfit inspired by an '80s cartoon, but I had a brainstorm when I realized that the amazing Hayao Miyazaki animated film, My Neighbor Totoro, originally came out in 1988.  My kids (and I) recently saw this movie for the first time (the version with English dubbing that Disney put out in 2006)--we thought that since we were living in Japan it was part of their cultural education!  Totoro is huge here, and for good reason--that movie is SO GOOD!  My kids can be sensitive to scariness in movies (my son can't handle any of the bad guys in most of the Disney princess movies), and this one has the perfect balance of humor, mystery, and magic.  They have watched it several times since our arrival, and they can often be heard humming the catchy Totoro theme song.

I was originally inspired to make a Totoro-themed jumper for my daughter, but I realized that my son loved Totoro just as much, and would be jealous if his little sister got something and he didn't!  So I ended up making two items. 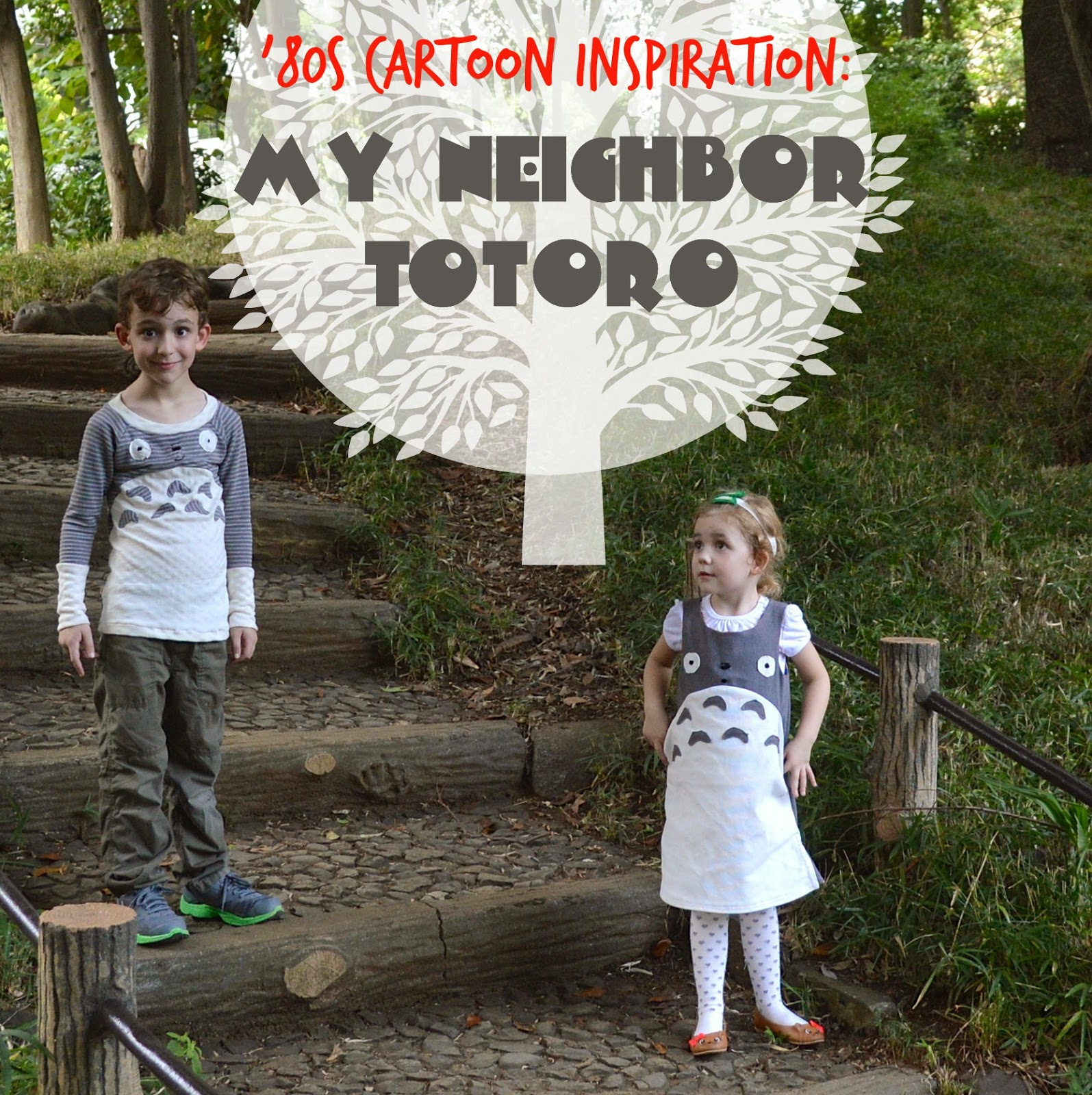 I started with these sketches--pretty close, huh? 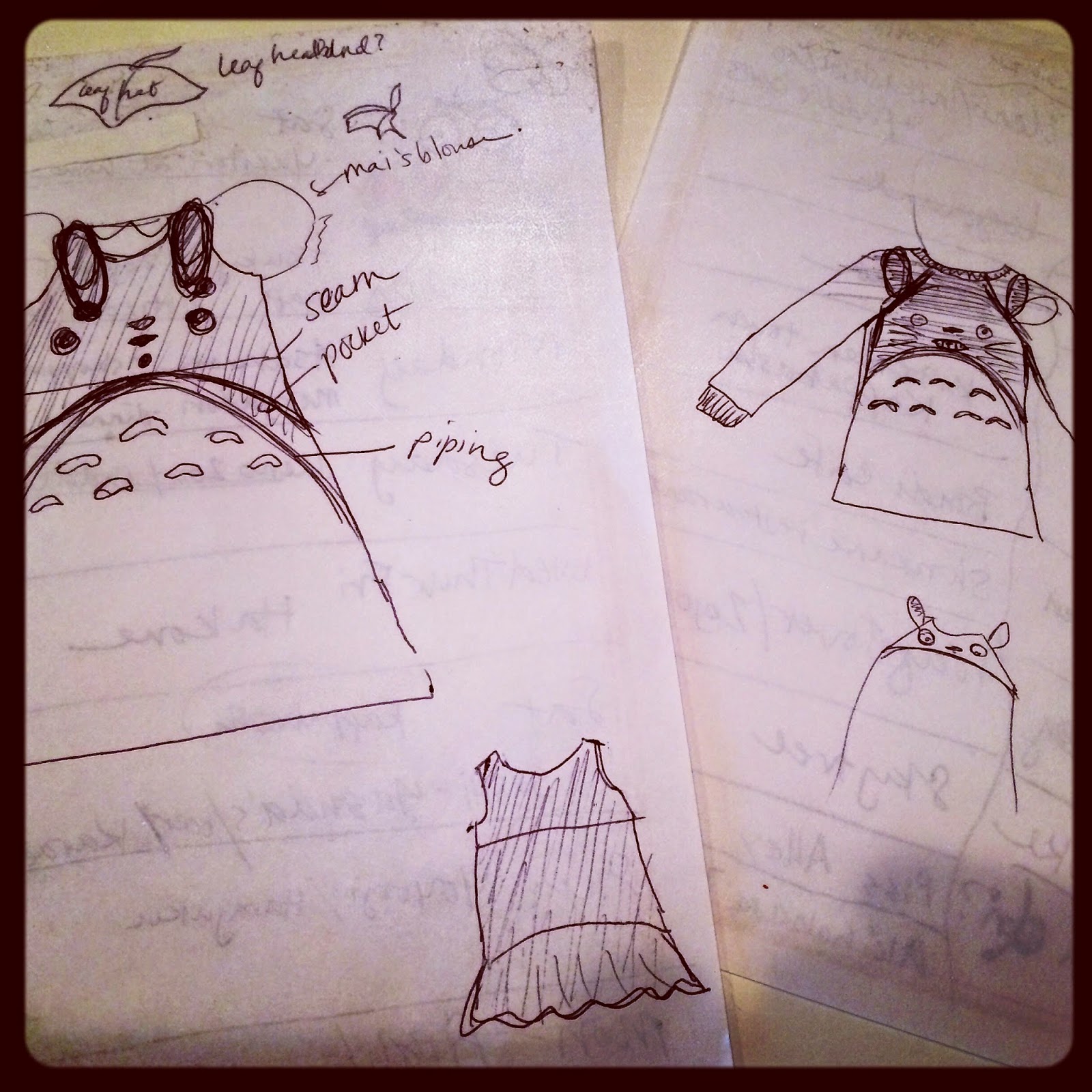 The t-shirt was pretty simple--I used this free printable pattern for a size 6 raglan sweatshirt, but since I was making just a tee for my lanky 6-year old, I made the body and sleeves a little slimmer and left off the band at the bottom (adding length to the body pieces to make up for it).  The body is color blocked to make the Totoro face/belly combo.  However, I cut the sleeves too short so that's why the cuffs are so long!  I could tell the pattern pieces looked too short for my guy--I have got to trust myself on these things!  Since his shirt was jersey and wouldn't fray, I left the appliqués raw-edged, and added a little embroidery for Totoro's face.  I cut the gray appliqué at all different angles--I thought it added a little whimsy to have the stripes going every which way.

The gray stripe was a knit fabric I had brought from the states--I ordered it from Girl Charlee before I left, and it was a really nice soft jersey with a little bit of thickness.  I found the cool textured off-white knit in Nippori, Tokyo's Fabric Town, for only 100 yen per yard--score!

I needed something to use for lining on the jumper, which was the impetus for my fantastic trip to the aforementioned Nippori in Tokyo, otherwise known as Fabric Town.  You guys!  It was my best day in Tokyo so far.  This place was awesome!  There was an entire store of bargain fabrics, most for 100 yen per meter (so about $1/yard).  I bought tons of linings, and even some fun prints.  The main store had great prices too, and was divided into floors--one for amazing Japanese cotton prints, one for knits (which had its own 100 yen section), one for special occasion fabrics, and so on.  Lining the street on both sides were individual stores for trims, home decor fabrics, leathers, notions, knits, etc--it was a little overwhelming, but mostly I just wanted to grab everything I could get my hands on.  I brought home over 24 meters of fabric, and spent less than $40!  It was wonderful, and I'm already planning my second trip there!

The fabric I decided to use for the lining was this beautiful buttery-soft printed double gauze. 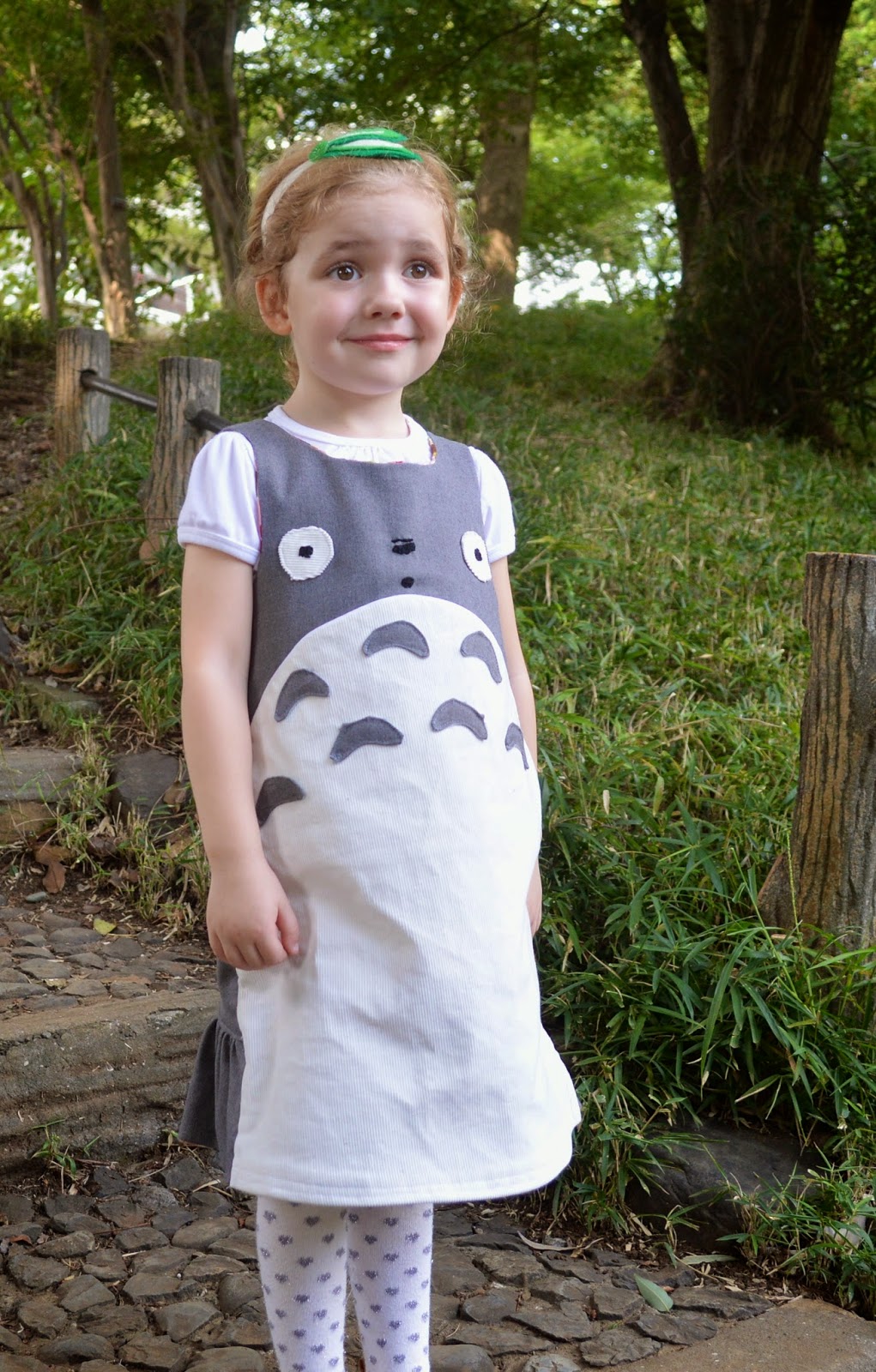 I already had the main gray fabric--it was a remnant just under a yard that I had brought from Portland, but the white corduroy was another Nippori find (200 yen per yard) to use for the tummy panel, which I made into a kangaroo pocket (also lined with the printed gauze.)


The pocket has piping around the outside for a little extra definition, and I appliquéd Totoro's signature belly tufts onto it.


For the basic shape of the jumper, I used this free pattern from Scattered Thoughts of a Crafty Mom.   In addition to the obvious addition of the kangaroo pocket, I also traded out the buttons in the back for a zipper, and added a ruffle just for fun.


I installed my zipper with a total cheater method, which I will describe below [edited--this post got so long that I'm just going to do a separate post with the zipper installation tutorial!] --I was amazed at how well it worked!  I am afraid of buttons--I do not have the patience to get everything lined up properly so mine always look wonky and messy.

We definitely had fun at the photo shoot--we walked to the large park near our apartment, where I had scouted the bus stop from the beginning of the post, but the kids were excited to find their own Totoro-esque locations too, like this little path tucked into the greenery... 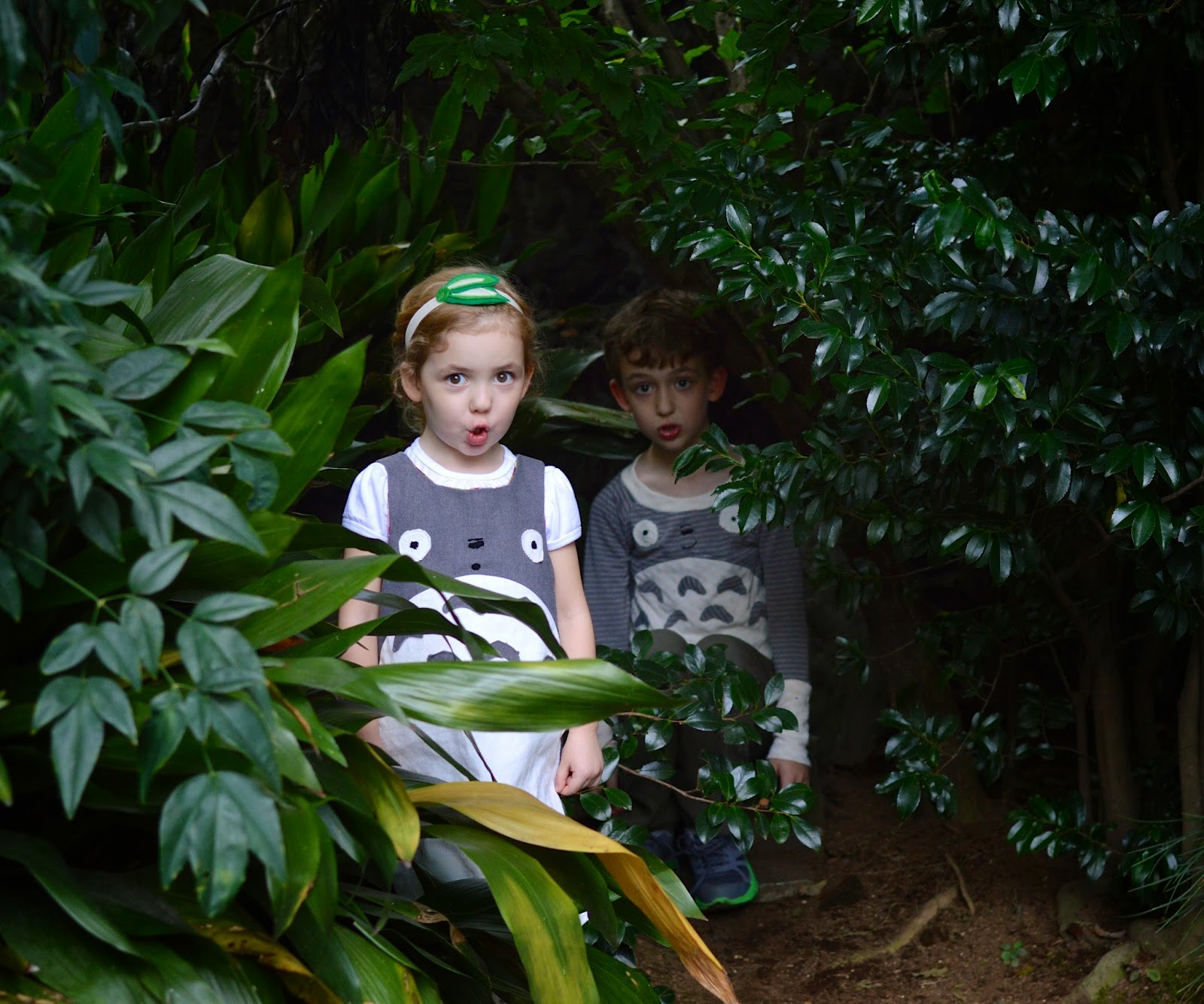 They also had fun showing me their best Totoro faces.

This was the most fun I've had trying to take photos of them in a while--they were totally on board today.  I guess I should make clothes with their favorite characters on them more often! 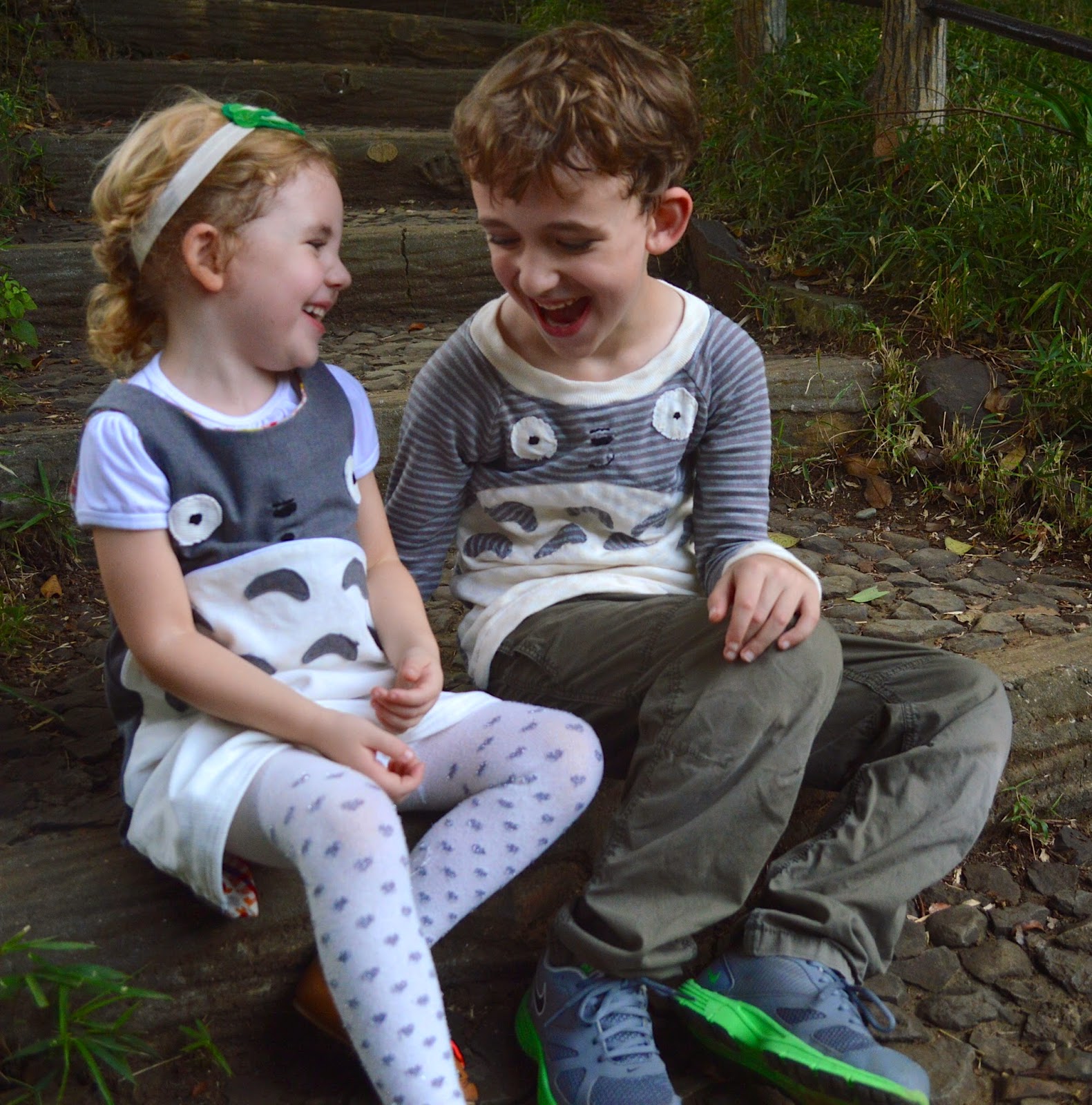 Well, I was going to do a tutorial for my cheater zipper method here, but this post is already sooooo long--I think I'll just make a separate post and link to it here.

Be sure to check back when all the other Project Run and Play sew along projects are linked up, and vote for the awesome competitors as well!  I can't wait to see what everyone comes up with.
Posted by bethanycavanaugh@gmail.com at 8:45 PM