How fortuitous--this fall's Selfish Sewing Week is occurring during the first time my husband has had to travel in four months!  One of the huge benefits of our current overseas adventure is that his job, which in the states involved travel 2-3 times per month, has been completely local.  Until now.  And while we miss him terribly, there are a few silver linings to this trip of his back to the good old U S of A.  Firstly, he will be able to bring us a bunch of stuff that's expensive or hard to find in Japan.  And secondly, I can sew after the kids go to bed without ignoring him!  I do have to say, my evening sewing time has been cut down since I used to spend a lot of my lonely nights in front of the sewing machine while the hubby was traveling, but on the flip side both of my kids are in school full time now, so I can sew during daylight hours!

So this week, I've decided to sew for the kids during the day, mostly for Project Run and Play submissions, and after bedtime it's all about me!  Here's what I've accomplished so far:

First, I made my first Washi tunic from Made by Rae!  And now I know why anyone who has the pattern makes it over and over again--I already have the fabric and modifications lined up for my second and third Washis. I love this pattern and although I am a total pattern cheapskate I would say that it was worth buying.   That's my recommendation for the one or two holdouts who still haven't bought this pattern ;) 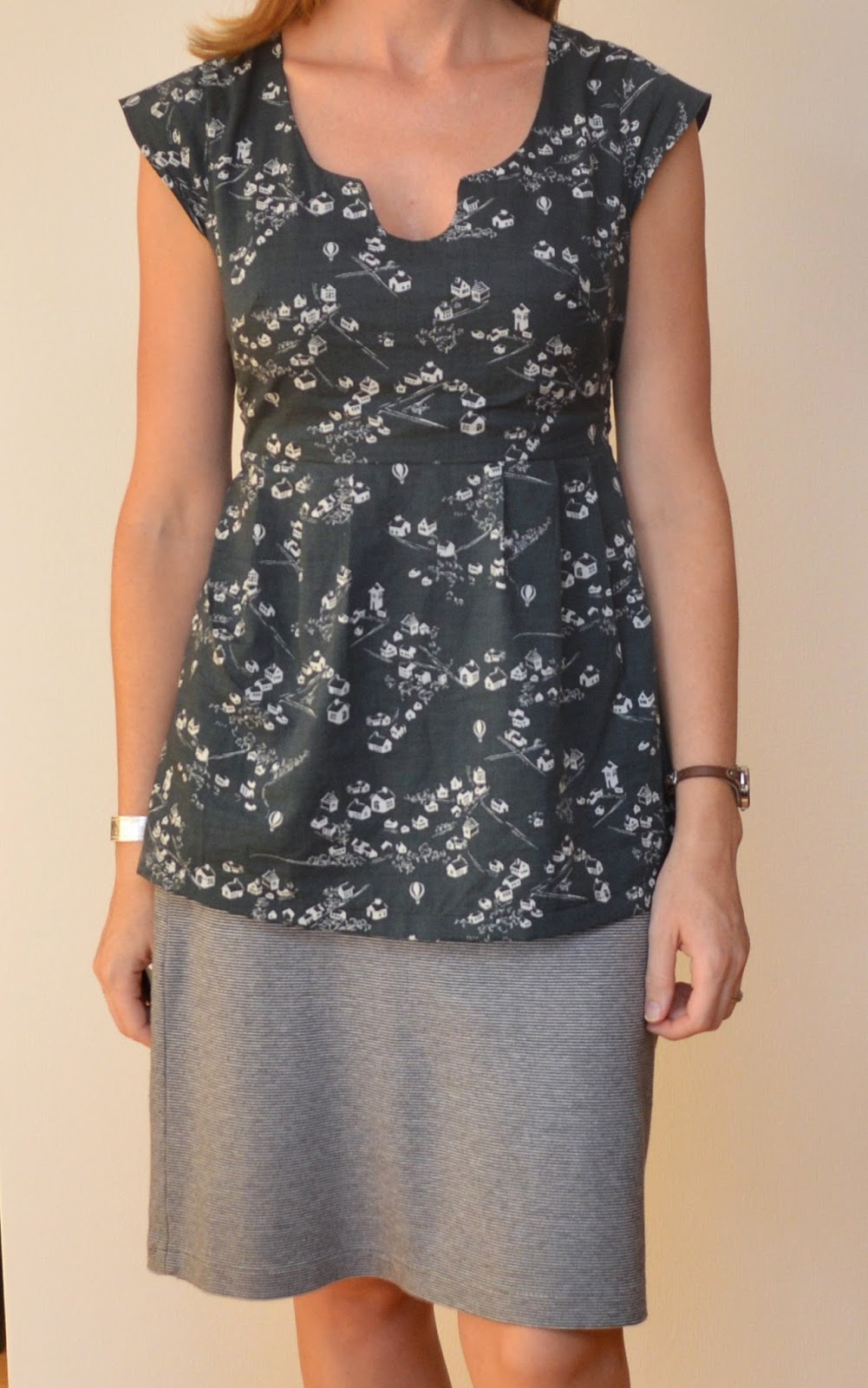 One of the reasons I waited so long to buy and make a Washi is because I have a  long torso and I was worried that the empire-adjacent waistline would look maternity on me.  So, duh, I lengthened the bodice by about two inches.  I love where it hits and think it's pretty darn flattering.  I LOOOOVE the shirred back--both for how easy it is to sew and wear, and also because it gives a really custom-looking fit. 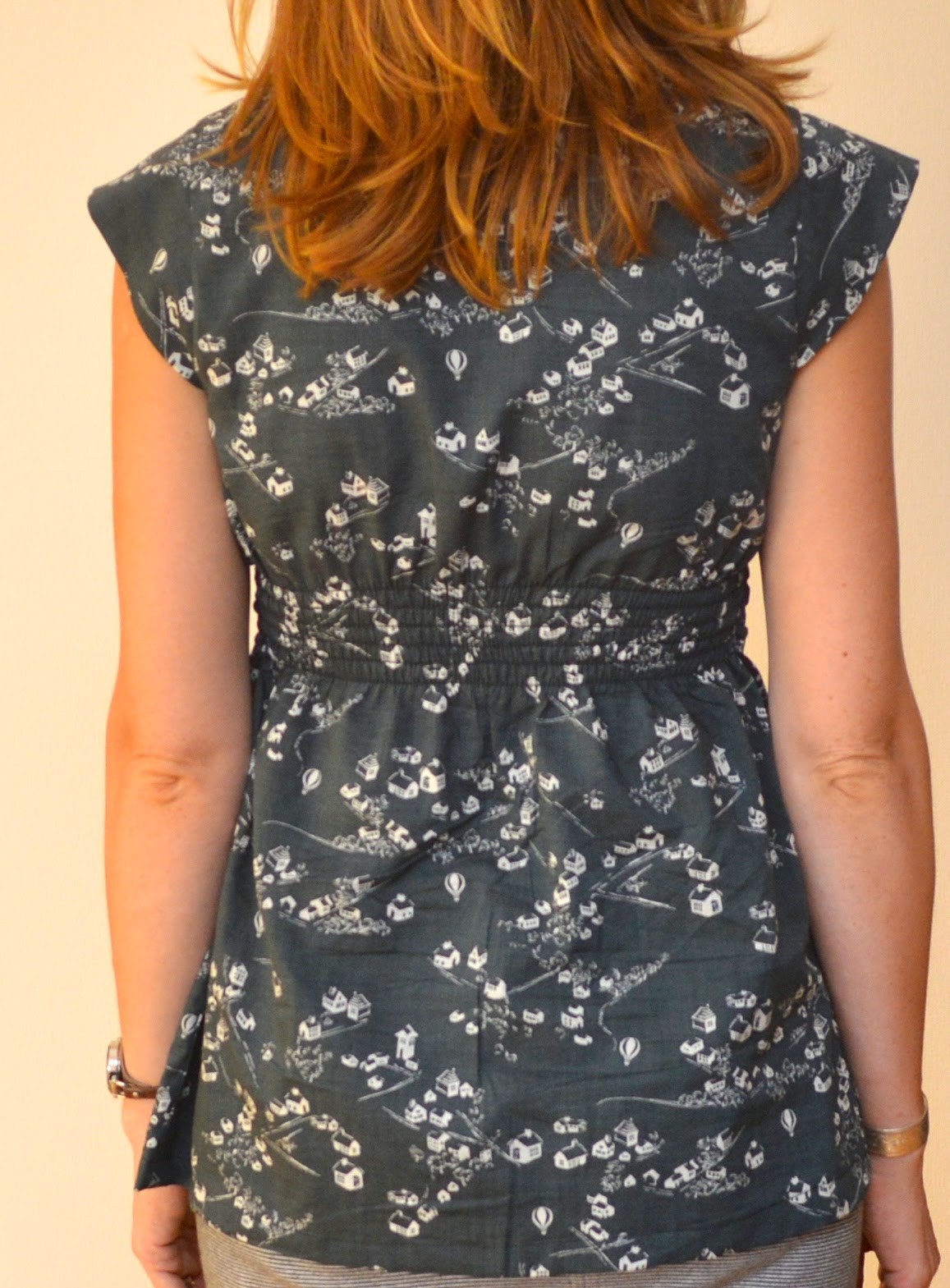 I used some Japanese fabric that I bought in Nippori, Tokyo's fabric town, at the Tomato discount store called Arch.  It was 100 yen per meter (so a little less than $1 per yard)!  I loved the print--it's little villages with hot air balloons--and the feel of the fabric (no maker information on the selvage, sorry!) but because it was such a great deal I also felt good about using it for my first try, as a sort of wearable muslin.  And it came out very, very wearable!  I used another 100 yen fabric for the lining--a soft navy blue cotton that feels maybe like a batiste?  I did the full front and partial back lining that Rae demonstrates here rather than the facings. 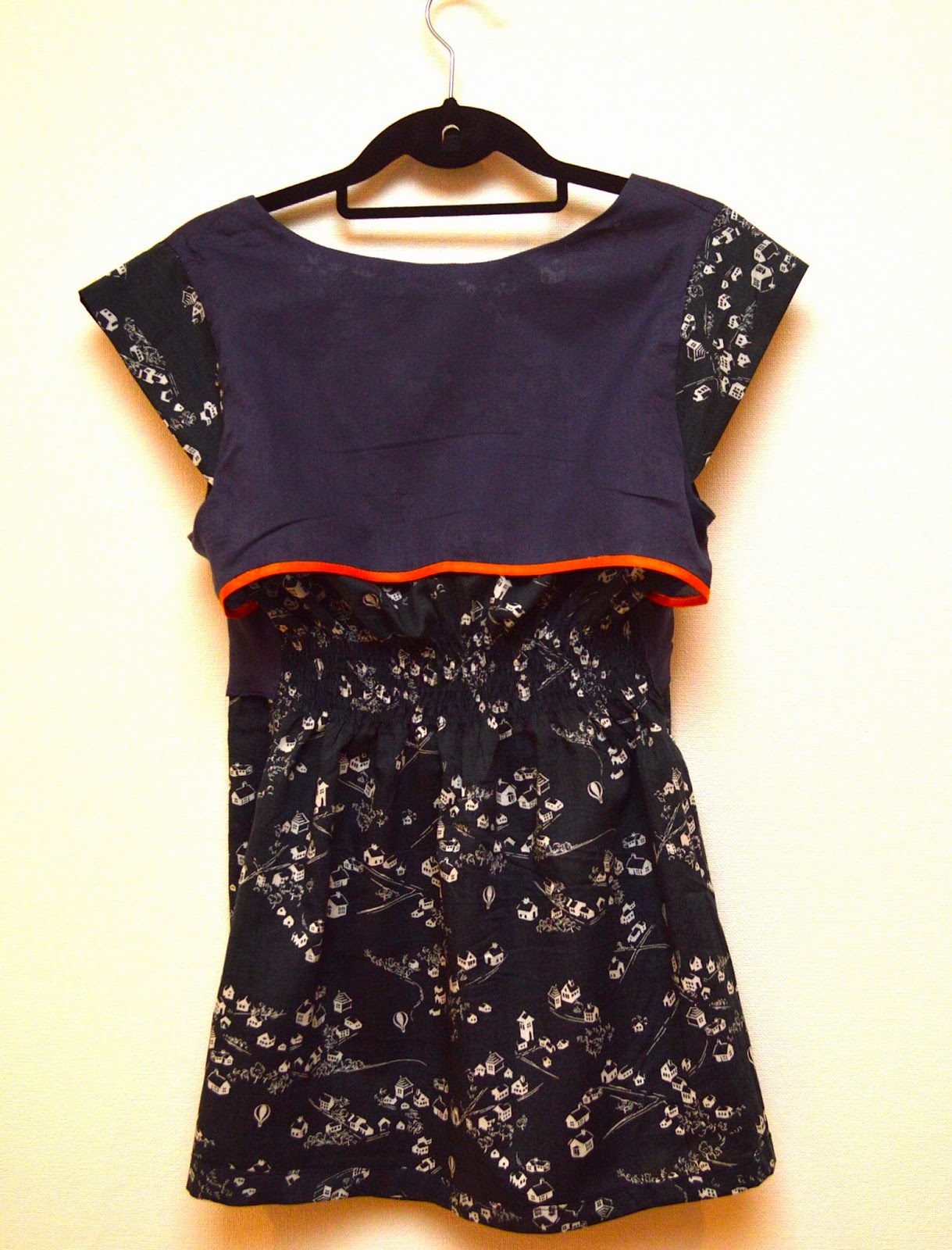 I originally intended to do a separate blog post just about my Washi top, but in the interest of time (MY time that is; I'm using some of it for blogging instead of sewing right now!), I'm just throwing all of my Selfish Sewing pieces thus far into this one post.

Next up is yet another 100 yen per meter project, a scoop-necked cap sleeve tissue tee using iCandy Handmade's free pattern.  I love it!

This fabric was a bear to work with--really thin and stretchy, so it was tricky to keep the stripes lined up, and sew it without stretching it all over the place.  But I love how the print has varying width stripes, and the wide ivory area that I put at the shoulders.

My one complaint with this pattern is that the armholes came out pretty small.  It was ok since my fabric was so stretchy, but I cut them bigger on my next try with the pattern, and I was a happier camper.  It might be because I did a tiny binding on the sleeves instead of just hemming them, but I really like the look of the bound cap sleeve and neckline.   I used one of the black stripes to make my binding for contrast with the top of the shirt.  I also added a couple of inches to the bottom because I like my t-shirts long.

I made one more of these shirts, this time in a nice thick knit from Girl Charlee that I brought with me from the states.  As I mentioned before I cut the sleeve openings a little wider on this one, but I kept the binding instead of hemming here too.  I kept this one closer to the original length of the pattern too--I think I only added an inch here.

I really like this one too, for a more casual top.  I think the other one can be dressed up or down, but this one is happiest lounging around with jeans.   This was a fun pattern because it's such a quick sew--each one took one night after the kids were in bed. 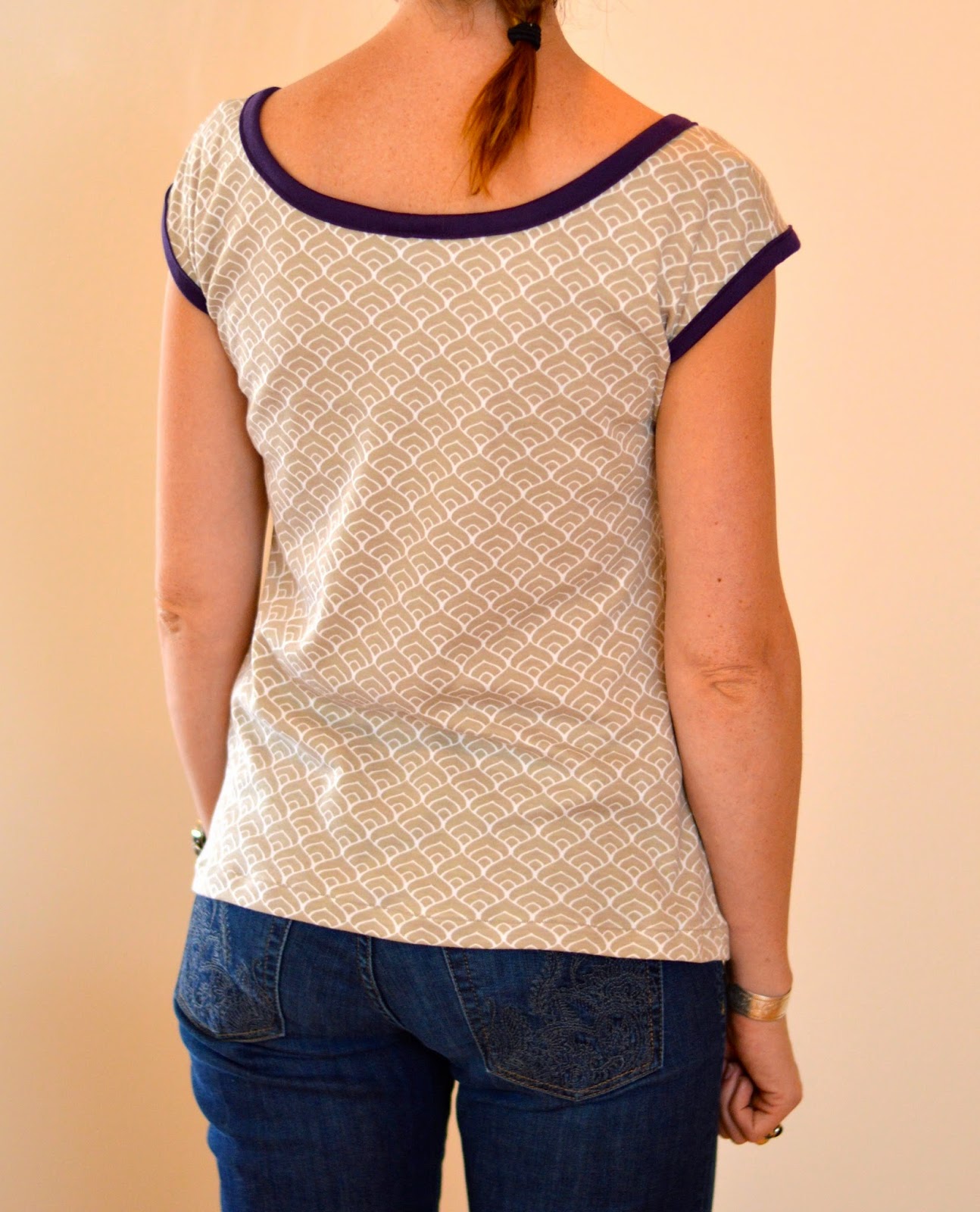 I had to include this photo--this was the test shot I took before handing the camera over to The Boy and letting him take the photos above of this shirt.  Hey, the hubby is out of town and sometimes I just don't want to pull out the tripod!  He did a great job :) 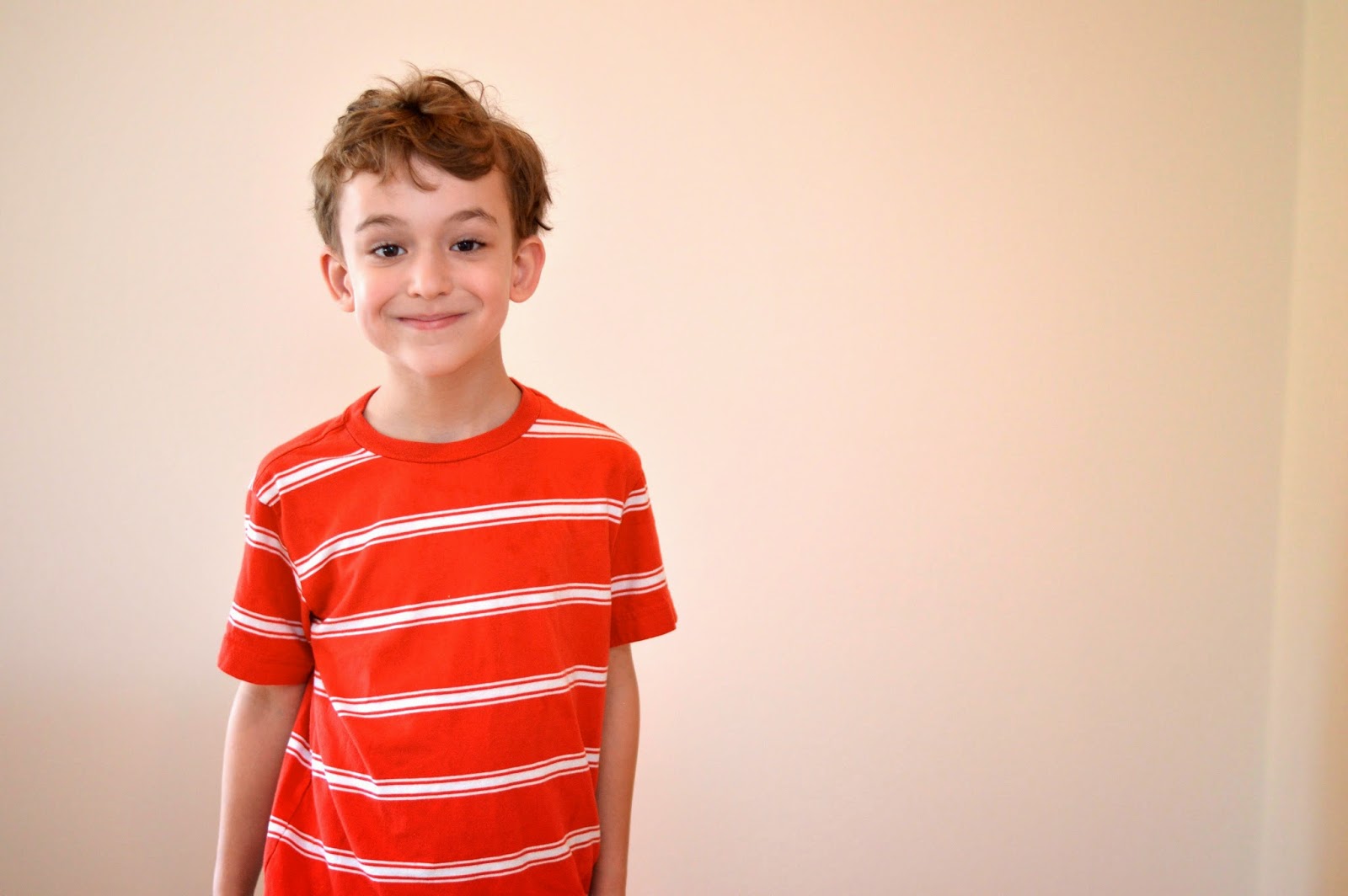 Finally, with another piece of 100 yen fabric, I made this cute cardigan, also a free pattern from iCandy Handmade.  It was an easy sew, since there are no closures.

The fabric I used on this one was a double-knit that looked like a fine sweater knit on one side and a sort of textured jersey on the other, so I used one side for the body of the cardigan and flipped it for the binding and cuffs.  I love the way it turned out! 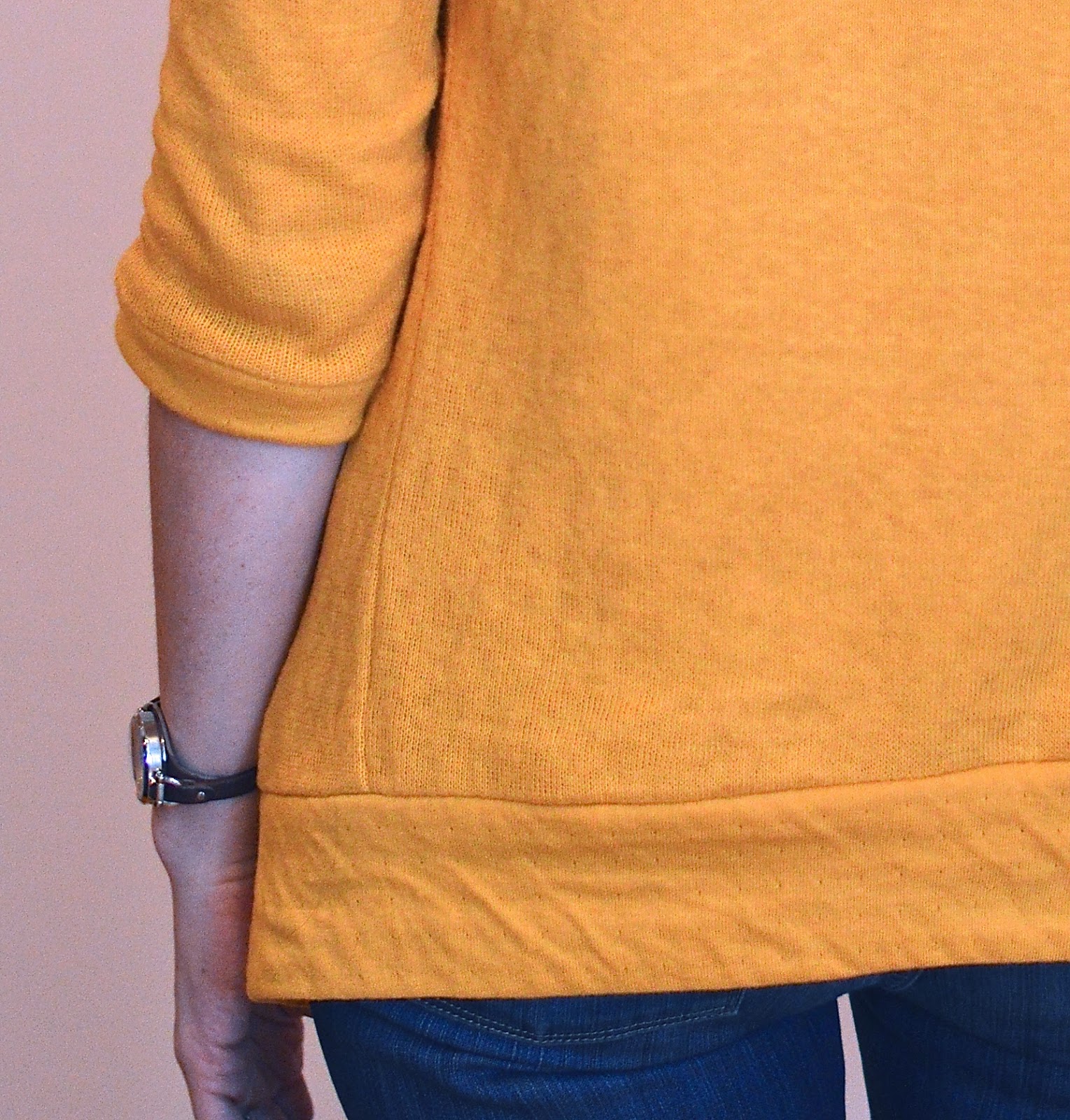 My fabric was pretty stretchy, so that may have been the problem, but I had issues with my sleeves being too wide at the top to fit the armholes as well as the back of the sweater gapping at the top.  I remedied both problems by adding inverted pleats, which I actually LOVE the look of and wish I could say they were part of the plan from the beginning. 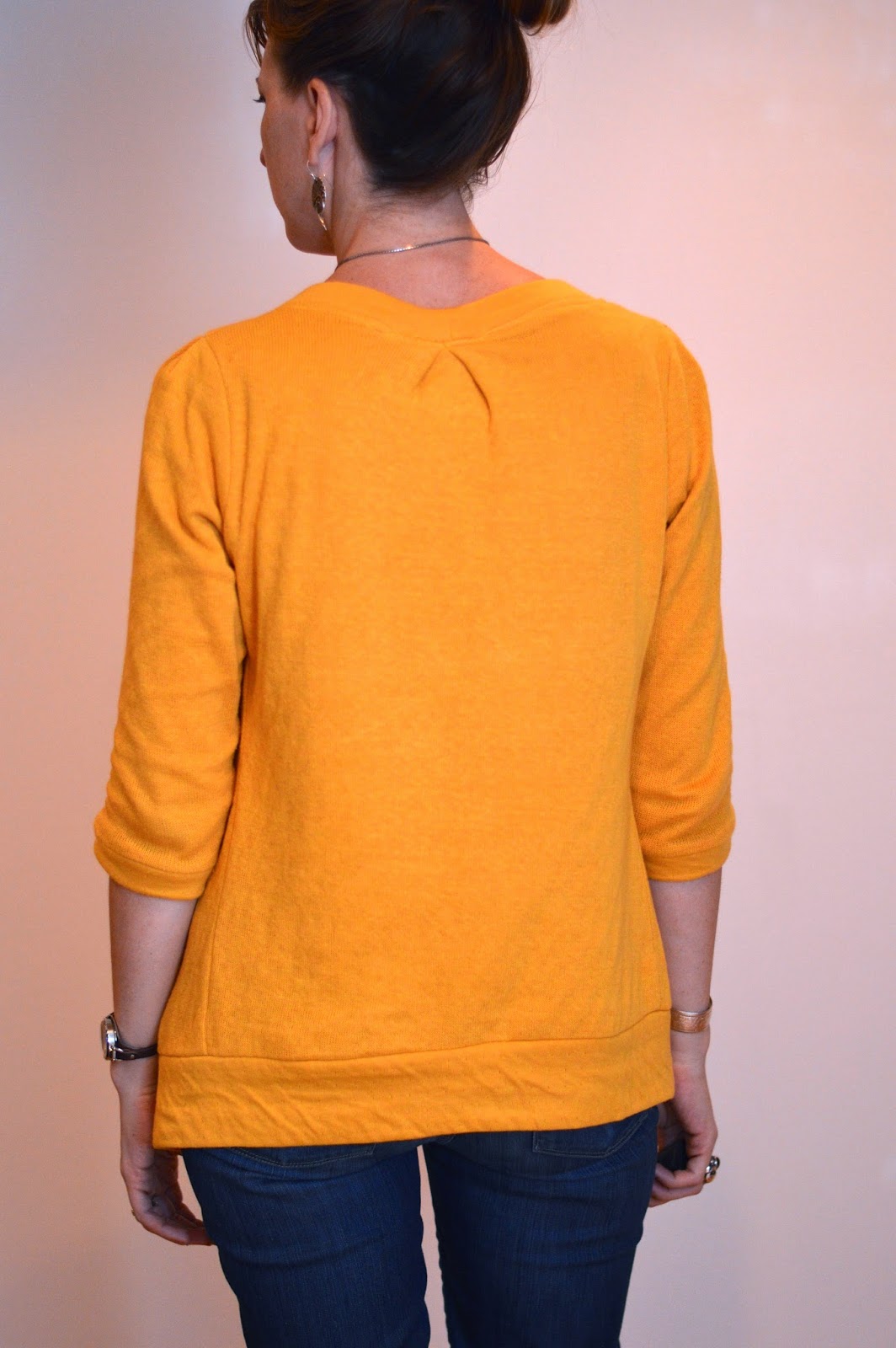 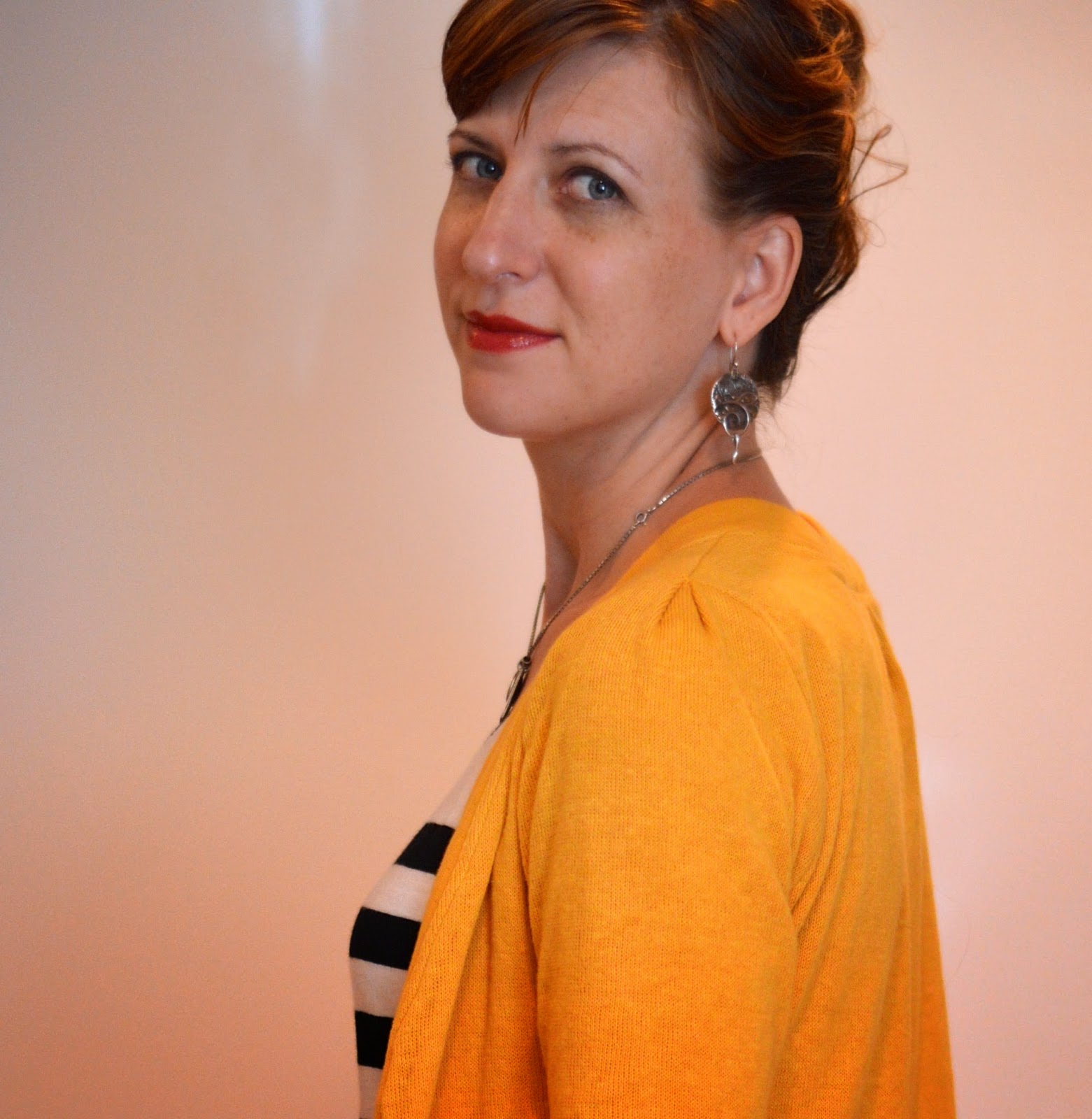 Hopefully I will have more to share for the rest of Selfish Sewing Week--I've got plans, big plans; I just have to find out how much energy I have after the kids go to bed the rest of the week!  **UPDATE--this post has the rest of my Selfish Sewing projects for this week.  Feeling pretty good about what I accomplished!
Posted by bethanycavanaugh@gmail.com at 6:11 AM