My oldest turned five.  FIVE!  That is full-on big kid territory.  As I've done a few birthday parties now, I am learning some things about myself as it relates to birthday party preparations.

While the full-on theme parties look amazing, I can't help but wonder how much the actual kids (both the birthday kid and the party-goers) appreciate all the work and expense goes into a party like that.  I'm sure the adults are all duly impressed, but...is the party for them, or for the kids?   I feel like the kids have just as much fun at a party that flows well and is well-organized, regardless of the tablescape.  I know for some people, decorating for the party is really fun and they love figuring out all of the little details, but for me...well, I think those parties look so fabulous in pictures, but when I start thinking about what is actually involved and what I would have to do to create it, I have to stop because if I got into it I'm pretty sure my head would explode.

Here are a few things that I have done to keep myself sane with the party prep: 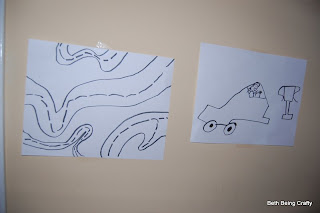 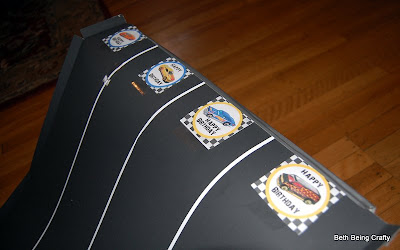 It was not very sturdy, but I was amazed that it not only held up for the whole party, but is as a matter of fact STILL residing in our basement where it is frequently used by the kids and slept on by the cats, about a month later.

I should have written the kids' names on their racecars--we only had 4 different colors, so it was hard to keep track of which car belonged to whom.

I searched Pinterest for racecar cakes and got several ideas, and this is my version.


A decorating note--I made my 5 by putting chocolate frosting in a baggie with a big corner cut off, then squeezed out the shape on top of the green frosting, and spread it flat with a knife into the 5 shape that I wanted. 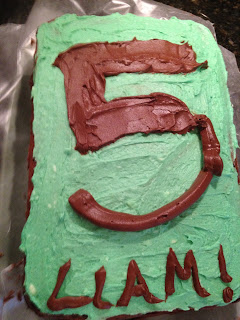 Then I topped that with crushed chocolate cookies to make the road.  Then, obviously, edged the road and the top of the cake with M&M's.  This cake was HUGE!  We had 8 kids at the party, and probably 14 adults.  Since hardly any adults seem to eat cake these days (with ME being the obvious exception, and a few others), we had over half the cake left over!  This worked out well, because I just cut the leftover into a rectangle, wrapped it in saran wrap and foil, and stuck it in the freezer.  Then a week later I pulled it out, scraped the old racetrack decorations off the top, made a little fresh frosting, and served it again for our family party!  Still tasted great. 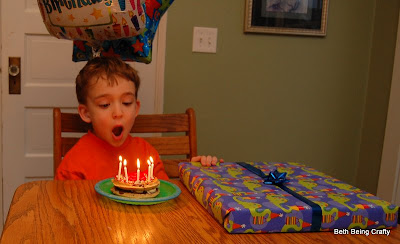 Finally, we STILL haven't gotten to it yet (BAD!  BAD host!), but I printed out these free Thank You cards for Liam to work on.  I like how they match the bunting on the invitation.


WHEW that ended up being a long post!  Guess that explains why it took me a month to get around to finishing it.

Posted by bethanycavanaugh@gmail.com at 9:11 AM