My littlest turned two!  I can hardly believe it.  We are officially past the baby phase at our house.  She is such a little person now, and with that number "2", I feel like I have to start letting go of considering her to be my baby.  She is already so independent and capable, and I have to remember to let her be the big girl she is!

Unfortunately, she has been sick all week, so we had to postpone her birthday party with her buddies.  But fear not, the grandparents saved the day by braving the germs and coming to celebrate with us on the actual anniversary of Little Sister's birth.

After The Boy's birthday cake debacle, I decided to buck up and bake and decorate my own cake for Little Sister's birthday.  She was having an owl theme party, and even though the real party isn't for another week, she had been so excited for her owl cake that I took the opportunity to give it a trial run.
I used this yellow cake recipe from smitten kitchen, and was surprised at how tall the layers came out!  It made for a pretty impressive looking cake.  I made it the night before and refrigerated it overnight, and I wished I had pulled it out a bit earlier because it's definitely better once it gets back to room temp--it's a little too dense when it's even a little bit chilly. 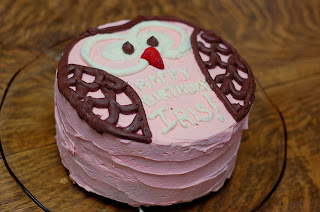 For decorating, I just made this quick vanilla buttercream, put a little in a plastic bag for decorating, then put a few drops of red food coloring in so that Little Sister could have the pink owl she had requested.  For the chocolate icing, I made a 1/6th recipe of this instant fudge buttercream, also from smitten kitchen, and it was de. lish. ous.  Looking for an opportunity to frost an entire cake with this.  After frosting with the pink, I just used the white and chocolate frosting in plastic baggies with the corner snipped off to do the decorating.


We all sang to the birthday girl, although I took the candles out of the cake and held them up to her mouth for blowing them out, so she didn't spray her germs all over the cake.
I used seedless marionberry jam for the filling.  The cake was a hit!


Sticking with our owl theme, both kids sported their owl shirts I had appliqued.  The Boy has had his for a while, but Little Sister got a new one just for this occasion. Hard to tell from the photo, but her owl has a "2" on its tummy.  These have rick rack legs and button eyes for embellishment.
I should take some better pictures of this and post it separately (honestly, don't know if I'll get to it), but I made an apron for Little Sister following the same pattern I used for this apron I made for a friend.  The only difference was that I added a patch with her name embroidered on it.  It's definitely sized for a bigger kid (4+, I would say), but we can fold it around the middle and make it work.
Little Sister refused to put on the matching chef's hat made from this free pattern (I used the toddler size), so I had to wear it.  I thought the apron could double as a dress-up chest item if it had the matching hat.  Tell you what--if I can get pictures of her wearing both items, I will make a separate post about it.


All in all, it was a nice low key celebration that included snuggles with grandparents:
Playing with big brother:
More grandparent snuggles:
And of course, opening presents.
The Boy quickly seized this awesome Melissa and Doug Vetrinarian dress-up set.  It's great quality, and even though it's more like a dress right now, Little Sister can totally put it on by herself and it will fit her for years.  Both kids have been playing with this ever since opening it, and I'm excited to use it  as a template to make more of this type of costume. 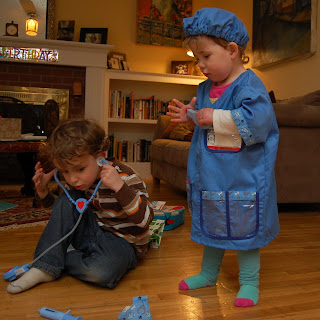 She also got the furniture to fill up the adorable "my first dollhouse" she got for Christmas.  It originally came with a refrigerator, dining room table and two chairs, and a toilet (you know, the important things), so she now has beds, a crib for the baby, couch, wardrobe, stroller, etc.  It even came with a Grandma. 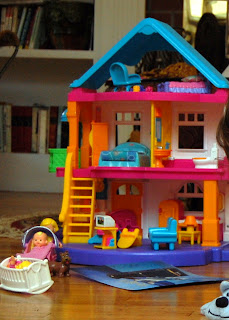 Oh, and of course, the stamps that big brother made.
She had a lovely birthday, and we get to do it again next weekend!  Stay tuned for owl-themed party favors and games, and take two of the owl cake.

Posted by bethanycavanaugh@gmail.com at 4:22 PM