She's been two for a whole week, so we thought it was time to have another owl party!

The good news is, Little Sister was feeling much better, so we were able to have Little Sister's buddies over for her "kid party" a week after the family celebrated.  And we needed the extra week--we had lots of fun projects we did together to get ready for the party!


I made a bigger owl cake, and based on The Boy's suggestion Little Sister decided she wanted her owl to be brown this time.  No arguments from me, as the chocolate frosting I used for decoration last time was SO GOOD--so this time I got to use it for the whole cake! 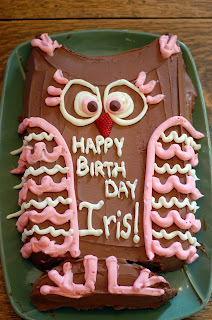 I tried this recipe for the cake, and I felt like the results were pretty similar to the first cake that I made--good, homemade tasting, but still not fluffy enough for my taste.  I had such high hopes, too, because this recipe required me to whip the butter for FOUR WHOLE MINUTES before adding the sugar, then add the sugar in 1/4 cup increments, whipping for another full minute after each addition!  That was the fluffiest dang butter/sugar mixture I'd ever seen, but it didn't really pay off for me.  For this cake, I made a 1.5 recipe and baked it in a 9x13 pan, then after chilling it I cut it into two layers.   If I do that again, I will divide it into two pans and bake it for less time--I think it was too thick to bake properly.


For the shape, I cut a curve out of the top of the rectangle to make the owl tufts, then used the cutout to add feet to the bottom.


Note--the chocolate frosting recipe makes A TON.  I made a full recipe plus a third, but pulled out a bunch of frosting before adding the chocolate to use for decorating (so I just used the recipe amount of chocolate).  I frosted the cake and used frosting plus seedless jam for the filling between layers.  And I have enough left over to AT LEAST frost a batch of cupcakes.  I guess that means I'm going to have to make cupcakes.  Oh bother.
You sure can't go wrong serving birthday cake to kids though.  They will always make you feel like you did a good job.  Even if you use box cake.  Which may be what I do next time. 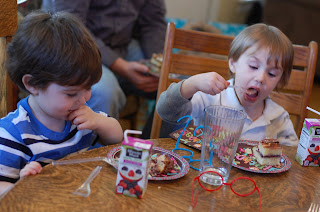 These "owl glasses" were one of the favors--I picked them up at Party City for 10 cents each.  I actually bought a pair a while back and used it for the photo I put on the invitation, but then the dog chewed up the glasses.  They look like they'd be tempting to a dog, right? 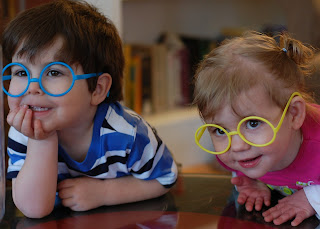 Another favor was the beanbag owls that I made using this tutorial.  The only difference is that I sewed the eyes and beak to the front piece of fabric before attaching the back and stuffing, rather than gluing them on afterwards. And I used fabric paint for the pupils.   I kept it simple by just using white thread for all of the beanbags, and learned after the first couple to keep the opening as big as possible at the bottom--SO much easier to get the beans in.  I used pinto, because they were cheapest.
Each kid got a beanbag owl, and I made a few extra to keep around the house.  I made this "owl's nest" beanbag toss from an old cardboard box and wrapping paper, with grocery bag "nests."  Lots of duct tape was involved.  I didn't take photos of this process, but it turned out that a few extra strips of cardboard secured by duct tape were necessary for internal support, so keep that in mind before you recycle the part of the box you didn't use for the basic structure. 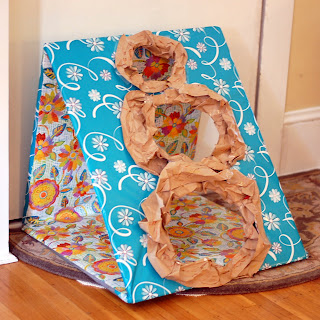 The Boy got some practicing in before the rest of the guests arrived.
And it doubles as a tunnel/hidey hole. 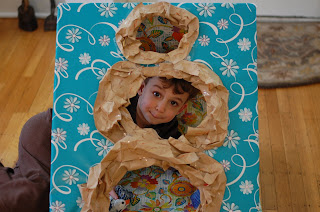 Our other party game was "Pin the owl on the tree."

I drew the outline of a tree on a roll of paper, then the kids painted it. (Some of Little Sister's painting did end up on the tree--once she figured out how to make "dots" she was more into it.) 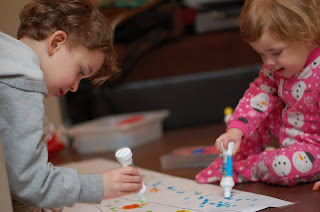 Once dry, I cut the tree out and The Boy glued paper leaves that I had cut out on the branches.  I drew a knot with a nest inside for the older kids to have a target, but figured hitting the tree at all might be a challenge for some of the little guys.  I printed out some little royalty-free owls on cardstock (you can see them stuck to the door to the left of the tree in this pic and the one above), wrote the kids' names on the owl tummies, and used rolled duct tape to stick the owls to the tree.  Kids who were willing to be blindfolded got a scrap of fleece hastily grabbed from my stash tied over their eyes before landing their owls. 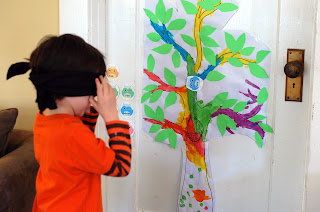 Another favor I added to the bags were these little coloring books.  I made the cover page from cardstock and just used regular letter paper for the inside pages. I found several free downloads of owls to color in and made a little booklet.  I got the idea to make these when I saw a cute crayon roll--I didn't have time to go hunting for owl fabric for this party, but I will totally make another theme coloring book and coordinating crayon roll for the next kid's birthday party!

The back cover had a photo of Little Sister that I used the new "pencil sketch" feature in Picasa to create.  I have done something similar using photoshop before, but it took forever!  Granted, the background hasn't been whited out here, but this was so quick.  I could feasibly reopen this image in Photoshop and finish the job there--I still think this would save me a lot of time.
My favorite part was the favor bags that we made.
I made a little template for the wing shape, 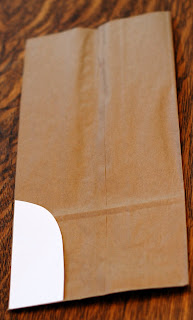 I let The Boy pick pieces from my wrapping paper scraps (I knew I'd been holding on to those for a reason!),
Then cut the wing shapes out. 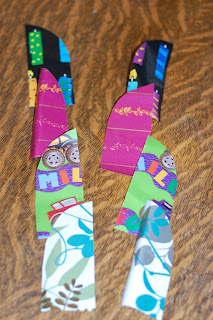 In the meantime, Little Sister was coloring the bags.  This step was totally optional, but it was nice to have a way for her to feel involved :)
I had The Boy glue the wings on--it was pretty easy for him because he just had to line up the corner of the wing with the corner of the bag. 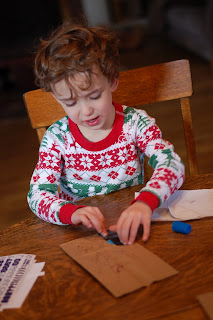 We traced a bottle top on cardstock to make the eyes, then the kids colored pupils on them. 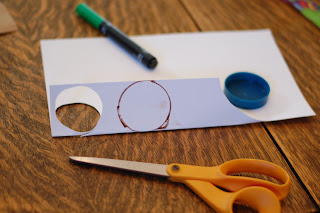 The beaks and feet were cut out of that foam paper stuff--I got a pack of 20 multicolored half-sheets at the dollar tree ages ago for various crafts.  Luckily we had some orange left (although I'm pretty sure that real owls don't have orange beaks.) You could easily use cardstock or construction paper for this.

The Boy glued on all of the eyes, beaks, and feet too.  I think these turned out so cute!  Once we had the top folded over, The Boy used alphabet stickers to spell out each kid's name on the top.  He enjoyed deciding who would get each owl.

The favor bags were filled out with some cute owl stickers I found at Target and a sucker that looked like an egg (I couldn't find any owl treats, and it was almost Easter--hey, owls come from eggs, right?)


I feel like I'm starting to get better at this theme party thing!  Maybe next time around, I'll branch into party decorations too--so far, I'm out of ideas (or more likely, time) before I get to that point.

Oh, and I almost forgot--this is what I sent out for invitations.

I know absolutely nothing about graphic design; it's something I would really like to learn one day but have resigned myself to the fact that no amount of messing around with programs I don't understand will get me where I want to be, so I'm going to have to take some classes.  Which means leaving the house at some point, and probably not after the children have gone to bed.  Sigh.  So in any case, I ordered this customizable digital invitation from Monkey Doodle Parties on Etsy--I think she's got all kinds of printable party packs too.  Then I just had them printed as a 5x7 photo--I think Costco is the best place to do that.  Easy, and still pretty affordable--I think the customized file cost me $8 (it was one of her sale designs), then the photo printing is something like 37 cents for a 5x7.

Posted by bethanycavanaugh@gmail.com at 1:41 PM