It's been over a week since my last post!  That hasn't happened for a while!  It's not because I haven't been making stuff though--I've got a backlog to show you, just as soon as I can find time for blogging about it.

This is beginning to be a problem for me (as you will see in this post)--the busier and more inspired I get with crafting, the less I want to stop and take pictures of my projects as I go.  I am trying very hard to make most of my holiday gifts this year, but oh my, I can work so much faster when I don't stop to snap pics!  Something I never realized when following other people's tutorials.  So I say THANK YOU, to all of you who take the time to make such great thorough tutorials!  I'm starting to get an inkling of how tough that is.

I had hoped to have a better holiday picture of the kids to show you by now, but...not yet.  We WILL have a good christmas card this year, dang it!  But for now I am reposting this photo to remind you why we are here:  the holiday jumper, made from an old pair of wide-leg cords.

I started with this old pair of pants.  Actually, they have never even been worn, but I finally realized that I was just not ever going to wear a pair of forest green cords, however much I would have liked to believe I would.  I guess I am just a jeans and brown pants type of girl. 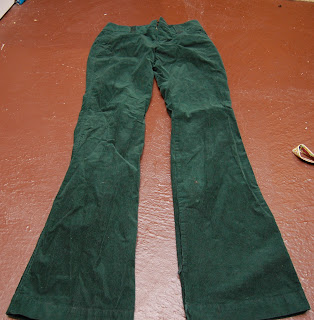 I realized that the wide legs gave me enough fabric to make a jumper, and I'd be able to reuse the hem on the pants.  Nice!  I was inspired by this adorable jumper from Boden: 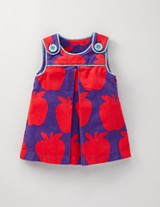 But you know my girl loves some pockets, so that was going to have to figure in.  I also found some vintage '70's ribbon trim at this awesome craft thrift store in NE Portland called The Knitt'n Kitten that I knew I had to use. 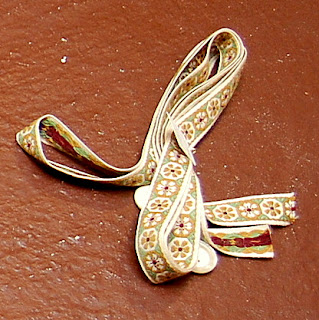 When I bought it, the woman at the register said, "Out of all the trims we have back there, this is the one you picked, huh?"  But I like it anyway.

So I started by cutting the legs  up the inseam, all the way around. 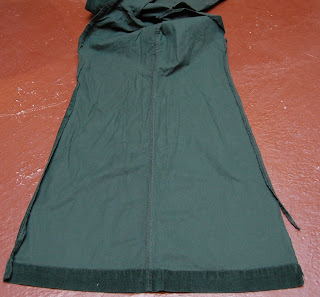 But once I'd cut out one side, I folded it along the center seam  (what used to be the pants' outseam) to cut out the other side.

I then used the cut-out front piece as a template for the back, with one important difference: 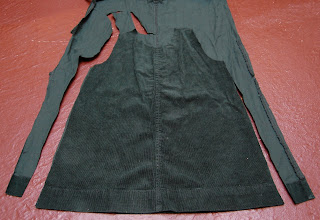 I left the straps on the back extra long, so I could put in buttonholes. 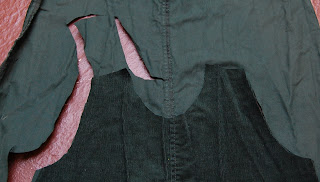 Here is where I sewed a piece of ribbon trim down the front and didn't take a picture of it.

Then I rolled the front neckline over, cutting little snips every so often so it would lay down flat. 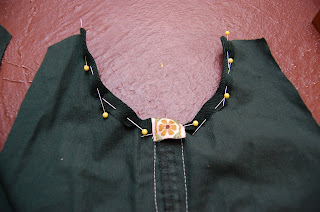 Oh, and I made pockets using Made By Rae's great pleated pocket tutorial.  Except that I used ribbon instead of fabric for the rectangular top piece of the pocket--worked out great, and less folding/ironing to do.  I just folded the ribbon in half, right sides together, so it made a loop, then stitched a little seam at one end.  I turned it right-side out, ironed it flat, and sewed the top shut, then followed the rest of the tutorial directions. 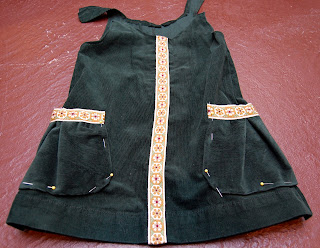 Here is where I got really lazy with the picture taking because I was in quite a hurry.  What is not photographed:

-Pinning the front and back panels right-sides together and sewing down the side seams
-While inside out, turning the edges on the arm opening and cutting little slits around the curve, just like on the neckline, then sewing them down
-Sewing on the buttons
-Making the buttonholes

So, after doing all of that, here is the finished product! 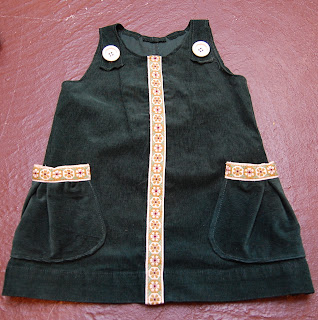 I thought I would manage a better picture of it at Thanksgiving, but our girl had an ear infection and four teeth coming in, so she was not really in the mood to model for me.  Here's the best shot.

Luckily, the pockets are big enough for multiple binkies.  She LOVES the pockets, and put all kinds of things in them on Thanksgiving that she found around my parents' house.  I don't THINK anything made it home with her though--I'd better check before throwing it in the wash!

Posted by bethanycavanaugh@gmail.com at 2:31 PM