At our international school, the Pre-K class's big field trip of the year is during their transportation unit.  For this trip, the 24 students (with about 12 adults supervising, myself included) rode the school bus to a train station, where we boarded the busy Yamanote Line train, then after a few stops switched to the Tokyo Monorail, which delivered us to Odaiba, a man-made island across the Rainbow Bridge from Central Tokyo.  From there we walked a few blocks to the beach, where we had a picnic lunch and some playtime, after which we walked to the ferry dock and rode back to our bus parking by boat.  The school bus then brought us back to school.

It was a fun and exhausting day!  And knowing that the kids would be toting their lunches/water/snacks through all of these different modes of transportation inspired me to make a backpack for Little Sister that was more manageable for her to carry around all day than her usual big school backpack, which has to be larger to accommodate her school work and such.  This is what I came up with:


It's the perfect size to fit her lunch box and water bottle (or when it's a family day, her coloring wallet, kids kindle fire, some snacks, and sunglasses), and I just couldn't love this fabric any more than I do. 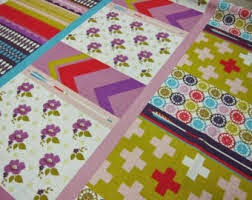 It's from the Melody Miller RubyStar line, and it has so many different prints mixed into one cut of fabric so it's perfect for a pieced project like this--I can give each element a different print! 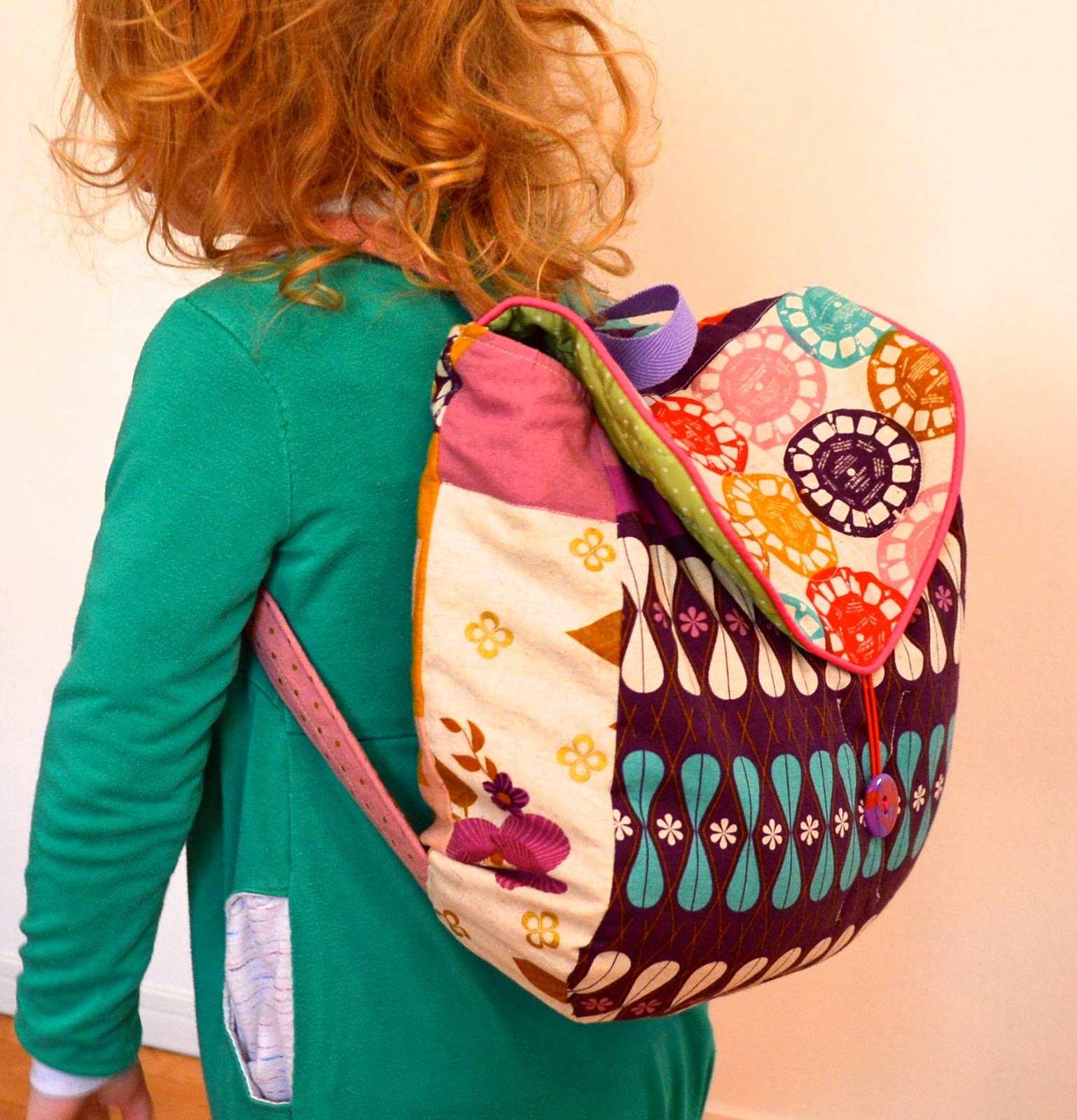 The front flap has the iconic Viewmaster print--I definitely wanted to show that off.  I added some piping around the outside, and the lining fabric is all the same double-sided quilted stuff I used to make Little Sister's Tinkerbell jacket for Halloween.  It was nice for giving the back some padding and stability without having to add interfacing.  It's impossible to tell in these photos, but I also quilted around some of the Viewmaster circles for a. some added interest/texture and b. some quilting practice. 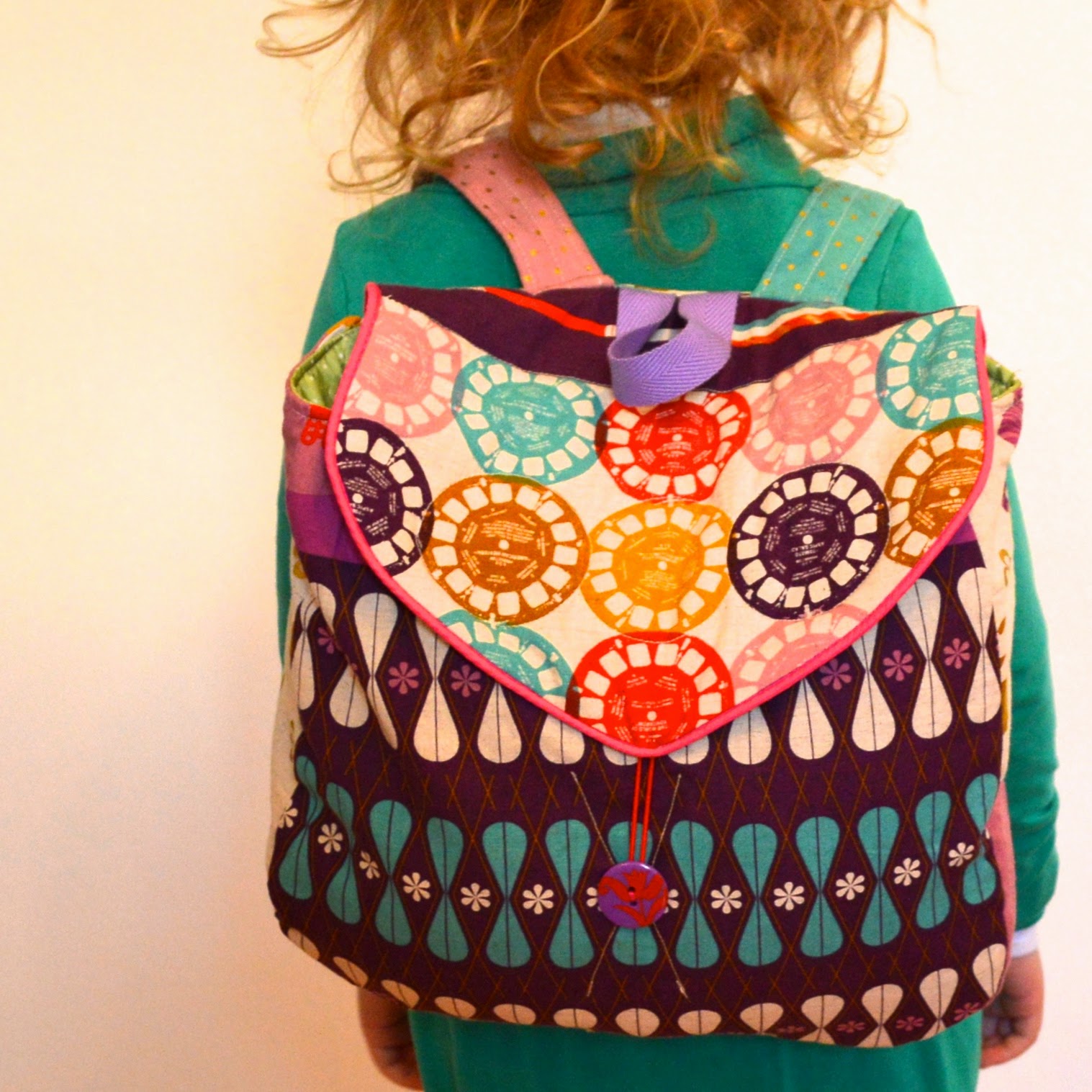 I also love the print that's on the main front panel of the bag.  It's a dark purple, and I love that it has personality of its own while still letting the viewmasters stand out.  In this shot you can also see that I used the pink and aqua stripes (with gold dots!) to make the straps, and it's a bit hard to tell but the top of the bag (where the purple hanging loop is inserted) has a cool arrow going across it!


I forgot to take pics of the back but you can sort of see it here, along with the floral side panels. 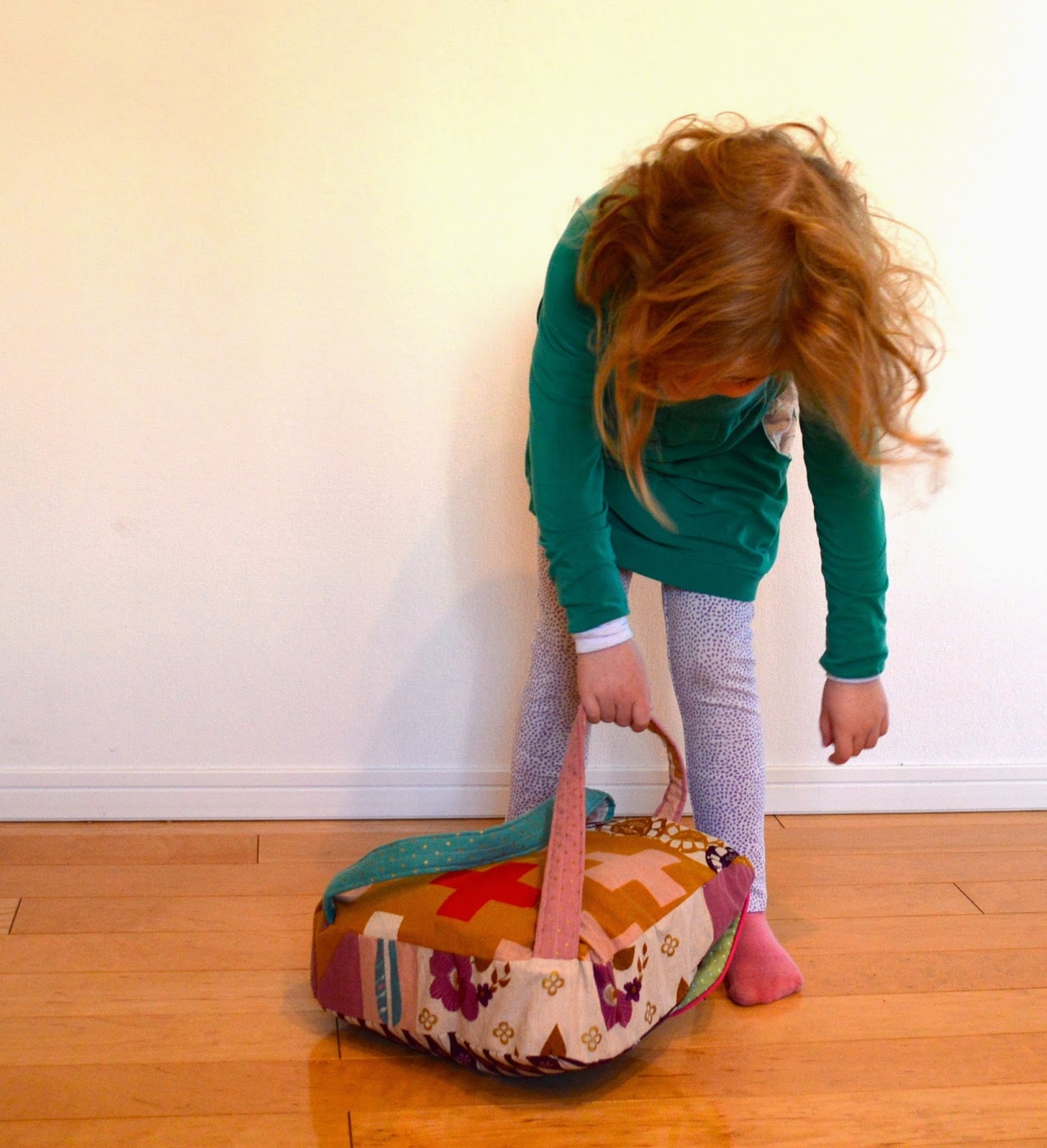 And here it is in action on the field trip-


I made up the pattern for this bag, but if you want to make one, I followed some basic messenger bag instructions like these but added backpack straps between the flap and the body of the bag instead of putting a shoulder strap on the sides.  The important thing for keeping the backpack from sliding off the shoulders is to get the straps as close together as possible at the top.  I cut my straps 18" long, and ended up trimming off just a bit when I attached them, making sure they were still even.

I actually started by making another backpack, which was adorable but too small to hold Little Sister's lunch box and water bottle:

This one was from this great tutorial (with free pattern!) from Indietutes, except that I scaled the whole thing a little bigger since the tutorial is for a two year old and my girl is almost five.  Also, I added a little elastic to the inside of the top front of the back to keep it closed.  So when I made the bigger bag, I had these proportions to go on, but I also decided that the flap would keep things more contained while still being easy enough for Little Sister to handle on her own.

Posted by bethanycavanaugh@gmail.com at 9:59 PM