I didn't think I'd be able to squeeze in any blog posts before my first-ever craft show on November 3rd, but then I saw Project Run and Play's link up for Halloween costumes, and since the costume was done and the photos were taken, all I had to do was get the post written so I could join the fun!  I should totally be sewing away right now, but a little break from the show prep will be good for my sanity.

A couple of months ago, I thought we were all set for family costumes.  My son is obsessed with Star Wars, so he wants to be Luke Skywalker.  We had convinced my daughter that she wanted to be Princess Leia. Our dog IS Chewbacca.


Husband and I would figure out something--The Boy wanted his dad to be Obi Wan Kenobi, so I guess that left me as...Yoda?  Han Solo?  I don't know.  But then Little Sister decided that she wasn't really interested in Princess Leia after all, and what she wanted was to be Rapunzel (specifically, the Rapunzel from Disney's Tangled).  And she wasn't budging. 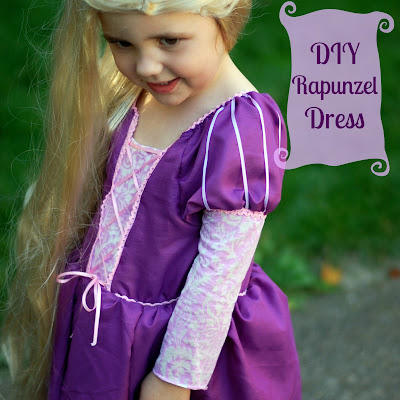 I should be thanking her, because since I don't feel the pressure to have family theme costumes, I'm not making costumes for myself and the hubby any more, giving me more time to sew for the craft fair.  Plus, I really had fun making the Rapunzel costume.

I used a purple microfiber sheet that I found at the Goodwill outlet in the perfect color for the main fabric, and accented with a pink burnout knit that I bought for $1/yard a while back at Walmart.  The pink elastic trim was another bargain, purchased for 30 cents a yard at a fabric store clearance.  The ribbons were handed down from my husband's grandmother.  The only thing I purchased specifically for this costume was the sheet, which I probably paid about a quarter for.

And the real score was finding this free printable princess pattern and tutorial from The DIY Mommy.  It was so easy to adapt into a Rapunzel costume, and her directions were great.  And the pattern just happened to be the right size for my daughter.   My main adaptations were swapping out the ruffles for my scalloped elastic, and shortening the sleeves and adding more elastic and the knit long sleeve to the bottom. Oh, and making the skirt split with a layer underneath. 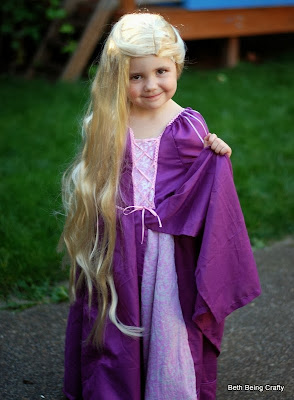 This costume will have a long life in the dress-up trunk.  The elastic neckline and waistband means my daughter can get into and out of it by herself, and there's plenty of growing room.  It also means the construction is easy, since there are no closures.

I keep admiring all of the details of this costume.  Little Sister wanted me to finish as quickly as possible, so while I was making it, she kept telling me to leave off the ribbons and trims.  Who does she think this costume is for, anyway?

In any case, I tried to balance practicality with authenticity, and it's kind of a toss-up over who loves this costume more, me or my daughter.

And how hilarious is that wig?  It's a cheap adult-size wig that somehow fits her head, and I found it brand new in the package at Goodwill for $3.  It was by far the most expensive part of the costume. 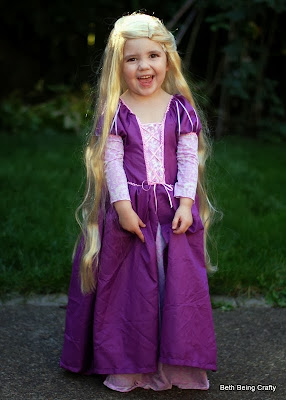 I will be amazed if the wig survives until Halloween. She wants to wear the whole costume whenever we're in the house, and that wig is shedding like crazy.  It gets stuck in everything and Little Sister is whining about hair in her eyes, mouth, and fingers whenever she has it on.  But is taking it off an option she would choose?  No it is not.  That is often Mommy's decision.

I will post Luke Skywalker's costume when it's done, but don't be expecting too much--I'll pretty much be making a new belt and leggings to go over his Tae Kwon Do uniform.
Posted by bethanycavanaugh@gmail.com at 9:24 PM