Next weekend, we are on our way to our beloved Auntie Megan's (my husband's sister's) wedding!  I just finished the kids' outfits--they will be the flower girl and ring bearer (or as close to those two roles as this tiny wedding will have).  I got to show some of my fabric stash to Megan and get her input as to what I should use, then make whatever I wanted for them to wear.  So fun! 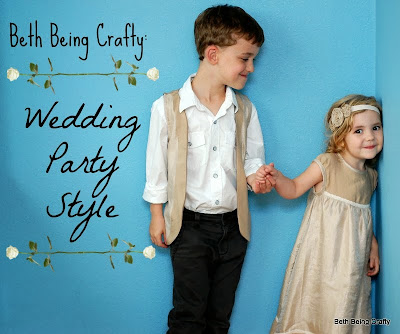 This project does have me a little behind on my Project Run and Play signature style theme outfit.  I'll probably end up linking this up, even though it's not really MY signature style--it should work because a long shimmering golden dress trimmed with lace definitely fits into Little Sister's signature style.  She dances around in this dress, calling herself a Golden Fairy Princess--she doesn't want to take it off!  But I can claim it too, because I really spent a long time figuring out exactly how I wanted these looks to come together.

The wedding is casual and outdoors at a gorgeous national park.  All the ladies (including the bride) are wearing boots--a perfect excuse to buy a new pair for myself!  The fabric is fairly fancy--did I mention the shimmering golden aspect?  So how to make a dress that fits the casual outdoor be-booted style as well as looks good in the fancier fabric?

I decided on following Craftiness Is Not Optional's sewalong/tutorial for the Leah Dress/Tunic.

I used the back side of the shimmery gold fabric, which resembles a tan linen, for contrast and earthiness in the bodice and a band at the hem, which I angled down at the side seams.  (Side note--I had Little Sister try it on before I added the hem to figure out length, and she did not want me to cut off ANY!  I had planned to make this a shorter dress, but as usual her passion for the long-long dress won out.  See whose signature style this is?) I used crocheted cotton off-white lace for trim, to add to the bohemian look.

And I finished off the look with a raw-edge rolled fabric flower headband. I saw this visual on Pinterest which showed me how to make these flowers.

I used an antique button from the hubby's (and hence the bride's) grandma's button stash for the closure. 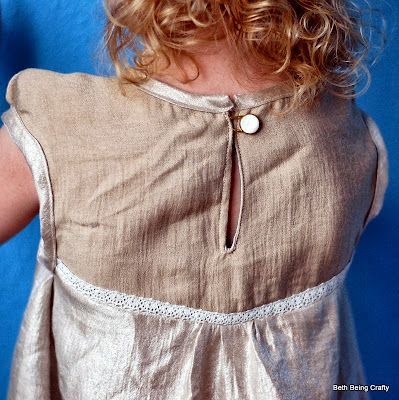 Oh, and the thing that really makes this dress a signature style for me--this fabric was $1 a yard, the crocheted lace trim was $1 for a 3 yard roll, the button was free, and the pattern was a free tutorial.  Total cost of this dress was about $1.00.  Bargain city!

This was not necessarily the best photo of the back of the dress, but I couldn't resist including it.  Love her expression!

I decided to make a coordinating vest for the boy out of the leftover fabric. I wanted to make him a bow tie but he was not interested in that at all. 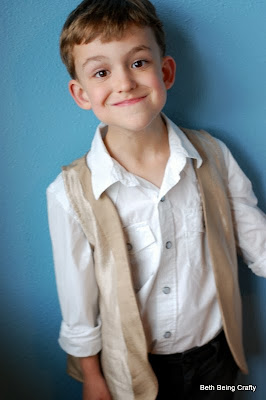 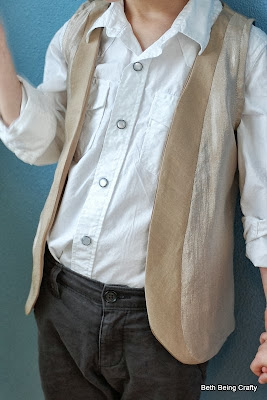 He already had some pants that would work, and I picked up a white button-down at Old Navy (I went with the snap-front style so it would be a little more casual), but I wanted to make him something to tie his outfit together with Little Sister's.  I used this printable pattern and tutorial from Fresh Off The Bolt for his reversible vest, although I left out the piping since I didn't have any on hand that coordinated, instead using the backside of the gold fabric again for contrast on the outside edge of the vest. I sized the pattern up a bit, since my boy usually wears a size 6 and the pattern is for a small size 5. I liked this rounded-edge, button-free vest both for how easy it was to make, since it had no closures, and the fact that it's reversible.  I don't see a ton of future use for a golden vest, but the reverse might come in handy.

I used the back side of the gold fabric for the back of the vest as well.  I felt like too much gold took the vest into Vegas magician territory, so I wanted to tone it down a bit. 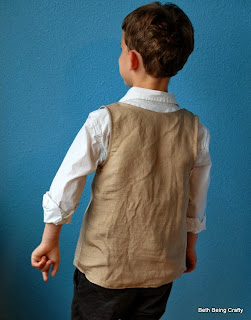 I didn't have enough of the gold to make the lining, so I used an old sheet. I decided to use single-fold bias tape on the armholes (turned towards the lining side) rather than topstitching the armholes closed as the tutorial instructs.  I hate ironing so much, you guys.  Store bought bias tape was easier for me.


My kiddos have been so helpful this month with posing for pictures for all of the Project Run and Play themes!  They are so funny together, I just have to post some of these. 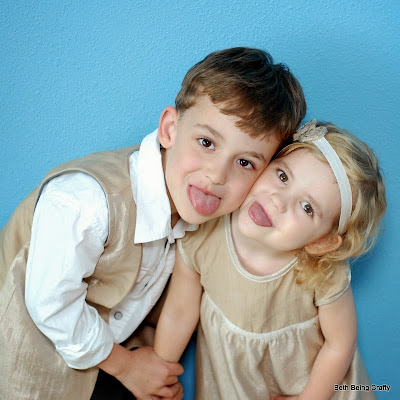 They came up with these poses on their own--I was dying, because they are seriously one glittery backdrop away from a prom picture here, am I right? 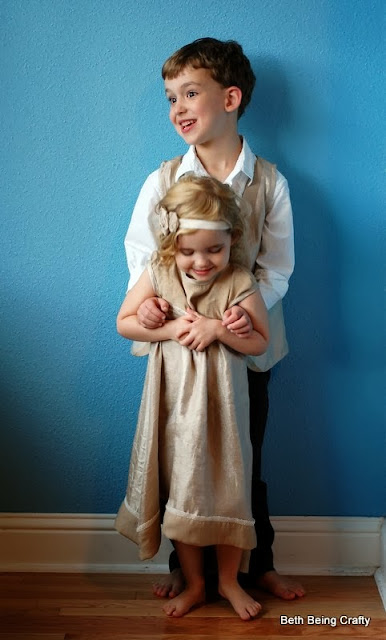 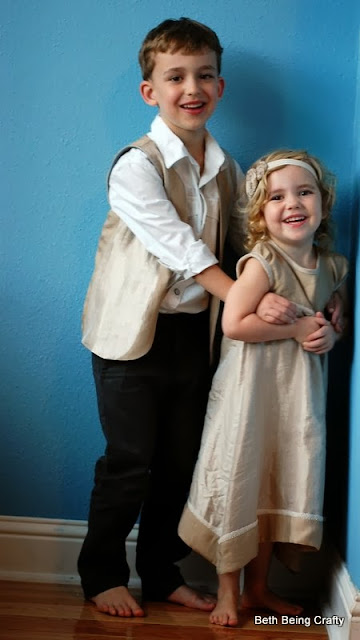 So now I have three days to figure out shoes for them to wear, and we're off to Wedding Party! 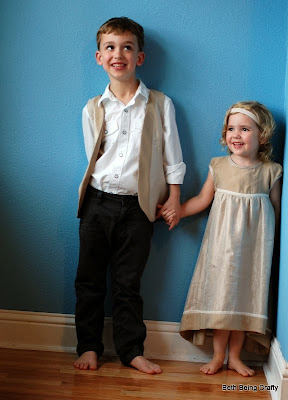 Edited--here they are in action at the wedding!  It was supposed to be in Yosemite National Park, but due to the government shutdown that went into effect four days before the wedding, we had some last-minute scrambling to do!  The venue was Evergreen Lodge, a lovely place right outside of the Hetch Hetchy entrance to Yosemite.


Posted by bethanycavanaugh@gmail.com at 7:37 PM