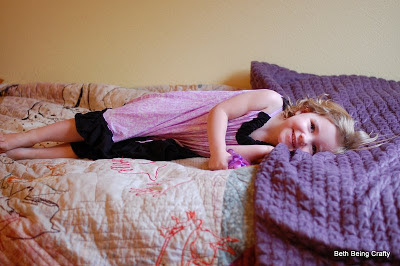 Since making my first nightgown a few weeks ago, Little Sister has refused to wear any of her old pj's to bed.  Pair that with The Boy having grown out of all of his warm-weather pj's, I've been making nothing but sleepwear lately!  This nightgown was based on this photo and tutorial that I saw on Pinterest:


Pretty simple to make, but it is intended for a bigger kid than Little Sister, so I could have cut down on the width a bit.  I also monkeyed with the casing at the top and mine came out pretty bulky, so I'd recommend just following the tutorial. 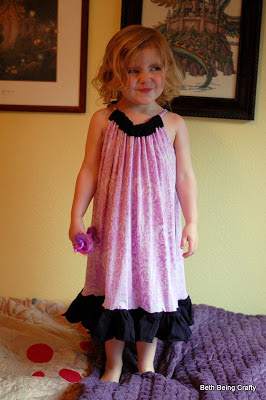 I used a piece of foldover elastic to make the straps, and I just sewed the ends together so I didn't have to worry about tying/untying a bow.  I do like that adaptation.  I don't know how long it ended up being--I just threaded it through the front and back casing and sewed it together, then slid it around until the sewn part was well hidden inside the casing. 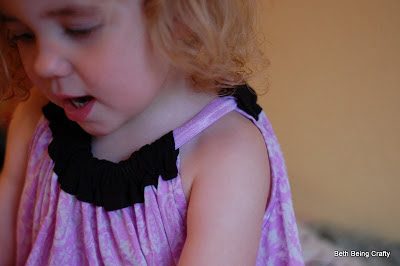 The pinkish fabric is a knit with a slight burnout pattern, so it is a little sheer.  That's why I left the width alone--I figured that if it was gathered up more, the sheerness would be less obvious. 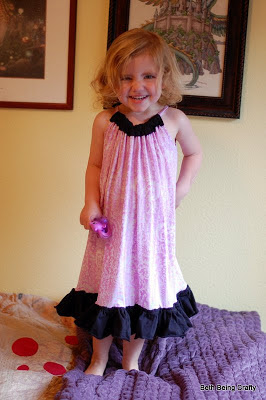 The pink brocade print + black ruffle does lend a little air of Brothel Lampshade, but it's still pretty cute on her.  And it's twirly.


This style could pretty easily be used as a dress as well--I think in this case the knit fabric (especially because it's a little see-through) keeps it well in the nightgown family, but I could see doing a daytime version of this as well.
Posted by bethanycavanaugh@gmail.com at 1:21 PM