In which a handful of scraps of old baby clothes and rejected fabric get assembled into a dress fit for a queen (well, okay, a princess). 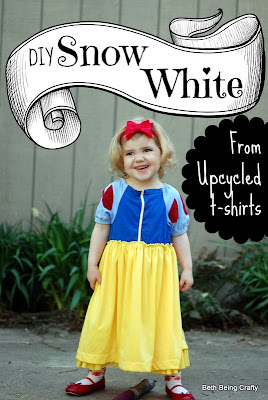 The princess obsession is in full force around here, with my newly minted 3-year-old.  I am not a princess person myself, but I didn't ban it or anything, so when Disney and his minions began working their way into the girl's consciousness, I was at first amazed and a little worried at how quickly and completely the princess posse grabbed her attention and interest.  However, I--hmm.  I'm struggling with how to put this.  Well, basically, I like playing along with whatever my kids are excited about.  When it was Thomas the Tank Engine for the boy, we did a Thomas birthday party.  He got Thomas gifts from us and family members.  And as it turns out, even though I didn't intend to be the mom of a "princess," it happens to be what she's into, and I'm going to let her have fun with it, and enjoy her enjoying it.  But there still is something mesmerizing about those Disney princesses for my girl (and many others).  My question is, how do they do it?  And how can I apply it to the eating of vegetables?

Anyway, when the big 3 birthday was rolling around, I thought a princess dress to add to the dress-up collection was in order.  I had a yard of this yellow fabric that I had ordered online thinking it was a cotton jersey, but it turned out to be something else--still not sure what, but definitely synthetic.  It is a knit, though.  But I had planned to use it to make pj's, and it definitely wasn't going to work for that.  Since Snow White is one of her faves (despite never having seen the movie--that singing voice might change her mind!  Yeeesh!), and her dress has a yellow skirt, I knew which princess I'd be going for.  It helps that she doesn't wear pink or sparkles.

The pickings were slim in my t-shirt upcycling pile in blues, though.  I ended up finding a blue toddler t-shirt and a light blue infant sleep sack, and making do. I had plenty of little scraps of red.


I had planned to go with a peasant style bodice, but since the only dark blue I had was the bottom half of a toddler shirt, I modified it so that only the sleeves were elasticized and the center portion just laid flat.


I thought I'd take advantage of the elasticized bottom on this newborn sleep sack since I planned on using elastic at both the top and bottom of my sleeves. 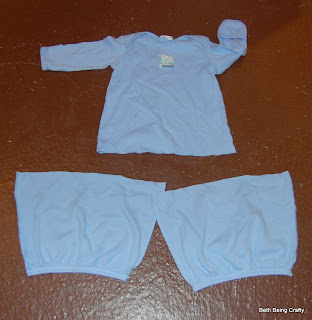 I based my sleeve measurements on this peasant dress pattern from Ellie Inspired, and used her curve cutout for my sleeves and bodice.

As you can kind of see from the picture, I used the hemline from the dark blue shirt as the top of my bodice.  I cut the curve out of all of my fabrics at once--the bodice front and back, folded in half, and the two sleeves, each folded in half.  This means I cut through 8 layers of fabric at once.  Risky, I know!  One thing I would have done differently is to place the sleeve pieces so they were sticking up about 1/2 inch above the bodice pieces, since the edge of the bodice was already finished and I would have to hem the sleeve pieces under. 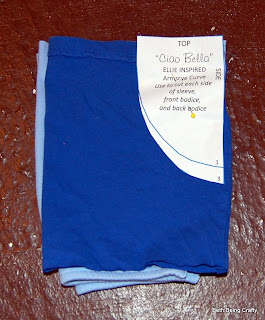 After cutting the curve out, I used some of my red t-shirt scraps to cut six teardrop shapes and sew them to the light blue sleeve pieces.  I just eyeballed my placement.  I also sewed a piece of yellow bias tape down the center front of the bodice at this point. 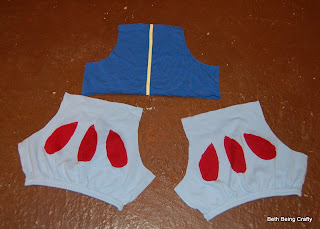 Since I was using the bottom of the t-shirt as my bodice, I decided to leave it all one piece instead of cutting it into a front/back.  That meant that instead of assembling my bodice in a t-shape (with the sides open), I first sewed my sleeves to the bodice, then turned the bodice wrong-side out to close up the sleeve seams.  Hopefully these pictures will help:


Oh, nicely done, Beth--here where it gets a little confusing I gave up on the pictures.  It was a few weeks ago--maybe this is where I decided that this wouldn't make such a good tutorial after all?  The best that I can remember is that I turned the bodice wrong-side-out at this point so that I could attach the sleeves on the back of the bodice, then sewed the sleeves closed while it was wrong-side out. 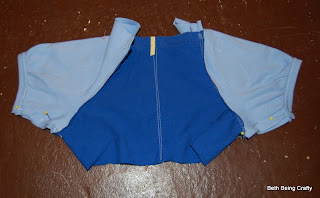 It would be much simpler to just have a bodice in two separate pieces, but I was worried that mine might be too small, since I'm pretty sure it was only a 12-month size shirt that I was working with.  I didn't want to risk making it any smaller by adding side seams.

And then the bodice was done! 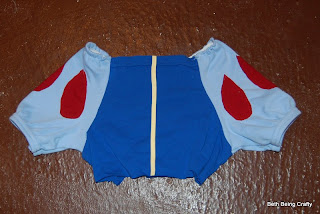 I won't go into a lot of detail on the skirt, because I had some grand plans that didn't work out so well...


But in the end, it was attached, and I was happy with it.  I will say that the fabric was really thin and swingy so I wanted to do a double layer.  I folded the yard in half and the skirt was a little too long--I had 4 extra inches or so, so I cut that off, cut it in half so that I had 2 long strips that were 2 inches wide, and sewed them together and gathered them and attached them to the underneath layer of the skirt.   You can see it peeking out in some of the photos--I wish I had measured better so that it stuck out more evenly.  The fabric was wide (54"), and I gathered the full width. 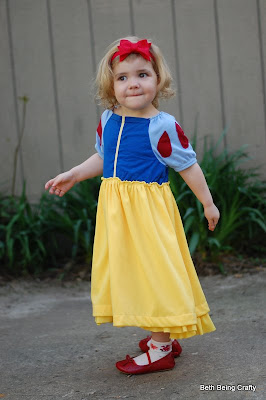 Oh, and I had to make the Snow White headband to go with it!  I looked at this pattern and eyeballed my own to get the size I wanted.  I think this bow is SO CUTE!  I even got her to wear it for Easter with her Cece dress, since it was red.

The purple light saber was a birthday present from big bro, which we made as a joint effort.  I will blog about that project soon!


I know this wasn't the most detailed of tutorials, so please let me know if you are going to attempt this and would like some more specifics. I was mostly winging it but I'd be happy to take some measurements etc. if the interest is there!

Posted by bethanycavanaugh@gmail.com at 5:09 PM