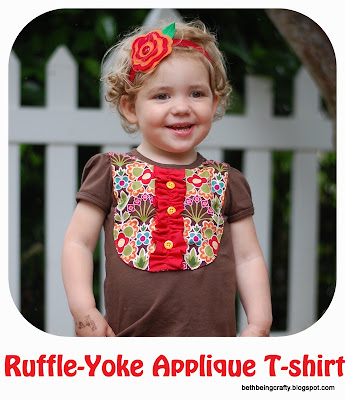 This is a story about a plain brown t-shirt and a scrap of adorable fabric.

I can't bear to leave a t-shirt unadorned.  And I had a few precious pieces of one of my favorite fabrics left, after my attempt to make the snappy top from Prudent Baby turned out too small and I had to give it away.  Ordinarily, I would use the scraps to applique some sort of critter on the t-shirt, but with this bold of a print I was having a hard time figuring out what shape to cut.  I wanted to see the print, not have the cute print distracting from whatever animal it was supposed to be.  So I came up with the yoke idea.

There were a few tricky steps, but overall it was simple enough to do.  Here are the steps!


First, I measured my t-shirt across the top from shoulder seam to shoulder seam.  I wanted the yoke to go almost all the way across, so I added a little bit for seam allowance.  I eyeballed how far down I wanted the yoke to go, folded my fabric in half (I paid attention to the print since I wanted it to be symmetrical, this will depend on your fabric choice), and cut the curve.  Then I laid my printed piece on top of the solid back fabric and cut out an identical shape.


For the ruffle, I cut a rectangle that was twice as long as my yoke.  For the width, decide how wide you want your ruffle to be and double that, plus a little for seam allowance. 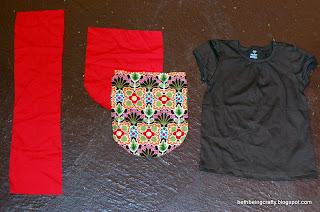 I started by making my ruffle.  I pressed both short ends of the rectangle under, like so:

Then folded it in half lengthwise, inside out (so that the flap I ironed down were sticking OUT), and sewed a straight line down the length, backstitching at the beginning and end.

For the yoke pieces, I laid them right-sides together and stitched around the outside, leaving an opening at the top the same width as the neckline of the shirt. Then I clipped the corners and the curve.

I turned both pieces right-side out and pressed them flat.  For the tube, I pressed it with the seam right in the middle, then I stitched both ends of the tube closed. 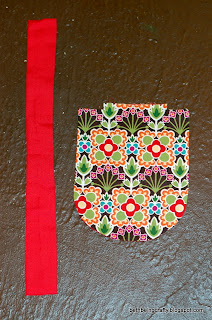 Next, I stuck the yoke piece inside the shirt so I could see where the neckline lined up.  Make sure to line it up evenly! 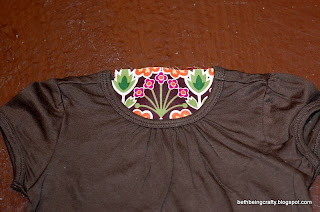 I traced the line of the neckline onto my fabric (with a white pencil, so it showed).  If you are worried about the line being visible on your fabric, you could do this on the back side of the yoke.  Actually, I might recommend doing that, so you can leave a little extra fabric above the line when you cut it out. 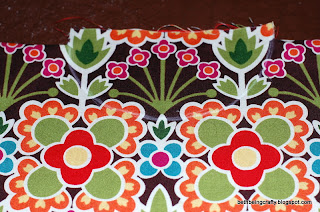 Then I cut along the line.  In retrospect, I think I should have left a little extra fabric (and maybe even serged or zig-zagged along the top), since I just sewed the raw edge directly under the t-shirt neck band.  I'm not entirely sure how this will hold up in the wash--I will let you know!

***UPDATE*** it has gone through the wash several times now and it's holding up just fine :) And the ruffle is holding its shape too--no ironing necessary! 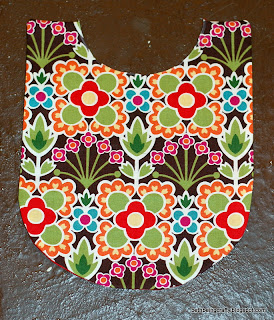 Next, I ruffled my tube by sewing a straight line down the center of the tube using a basting stitch.  Don't backstitch at the beginning and end, then grab your bobbin thread on both ends and gently tug to gather the fabric up to the length of your yoke.

Then pin the ruffle down the center of the yoke, lining up the top and bottom edges.  Using a straight stitch, sew right down the middle of the ruffle to attach it to the yoke. 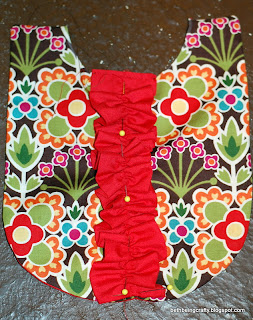 Now, this is the best time to sew your buttons on if you want them.  I forgot to do this and had to sew them on after I had already attached the yoke to the shirt--not ideal.  So if you want buttons, add them now!  I wanted four, but had to settle for three since that's all I had that matched.

Now you're ready to attach the yoke to the shirt!  Here's where you have to be a little careful.

On the front of the shirt, I carefully unpicked the bottom seam on the neckline using a seam ripper. You could unpick both to give yourself more room to tuck the yoke inside the neckband, but then you have to make sure you're getting both the back and the front of the neckband when you reattach. 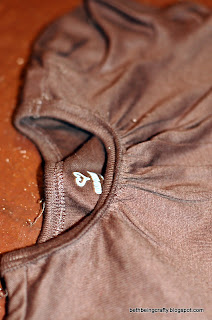 Then pin the yoke to the front of the shirt, starting with the neckline.  Make sure you have it lined up evenly by the shoulder seams, then pin your little loose edge of the neckband over the top of the raw edge of the yoke.  Take extra care by the ruffle, since you need to make sure to catch all the layers when you sew. 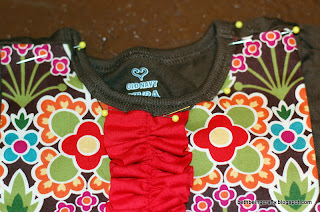 I started by sliding the shirt into my machine at the neckline and sewing starting with one shoulder and going across the top first (shoulder, neckline--CAREFULLY, other shoulder), backstitching at both ends.  Then I took the shirt out of the machine, made sure I was pinning the rest of the yoke down flat, then slid the shirt onto the machine from the opening at the bottom to sew the rest of the yoke.

Like I said, I wish I had added my buttons earlier.  I wanted to use brown buttons, but... 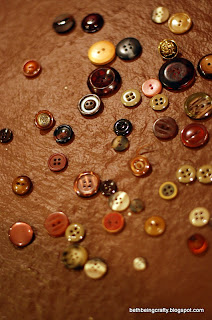 Yeah.  I had no two brown buttons that matched.  The downside of a vintage button collection.  Since I decided I didn't want the eclectic mismatched button look, I went with yellow, since I had three that were the same. 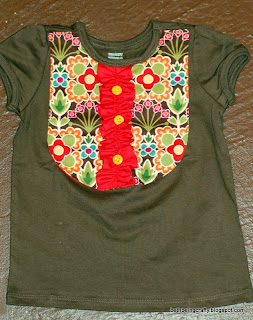 Here are my three buttons--if I had actually gone SHOPPING for buttons instead of using my stash, I would have probably chosen something bigger.  And brown, since the red/yellow combo always makes me think of McDonalds. 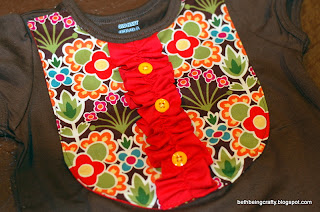 But I'm happy with the way it turned out!  And I like this way of dressing up a plain t-shirt. 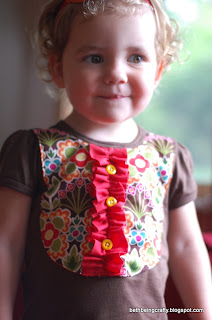 Of course, YOU may prefer to dress up your plain t-shirt with a tutu.


Posted by bethanycavanaugh@gmail.com at 9:45 AM