I had a package all ready to go to mail to my friend who lives on the East Coast.  She and her family had visited over the summer, and therefore they left a bunch of stuff behind--some important, some not.  So of course, I rushed right out to mail it all back...about three weeks after they went back home.  I realized as I was getting the package together that A.  I had some extra room and B.  Jill's birthday is about two weeks away and C.  I wanted to include a birthday present, but D.  I wanted to mail the package tomorrow, so E. the present had to be QUICK!  And MADE FROM THINGS THAT WERE ALREADY IN MY HOUSE!  Oh, and she's a crafty one too, so I had some ideas but they were things that she has probably already made for herself.

So, I quickly joined Pinterest so I could poke around on her page and see if there was anything that would inspire me to whip something up.  Nada (at least not that fit the criteria).  So I just started browsing, and I came across  this tutorial for repurposing a sweater into an infinity scarf.  I've been wanting to make an infinity scarf ever since I bought one for a friend last year at a craft show.  The one I bought was made out of soft jersey, like an upscale t-shirt fabric, then potato-stamped--totally great idea that I might copy one of these days.  Perfect!  And bonus that this happens to be a Portland blogger (even though I have no idea who this is).


First I dug through the hubby's closet, because I know he has tons of sweaters that he never wears any more.  But since he wasn't around to consult, I figured I'd better not cut any of his sweaters up just yet (next time!)

I found this old hoodie that I bought years ago even though it was way too big for me because I loved the print.  I wore it through my pregnancies but could no longer justify keeping it in my closet. 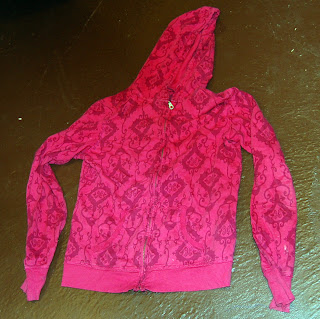 Pro for using it for this project:  it's a size XL, so there was plenty of fabric.  Con for using it:  the fabric is printed, which it didn't occur to me would cause problems until I was in the middle of piecing the scarf together.  So, the print doesn't match up on any of the bazillion seams in this thing.  Luckily, the pattern is somewhat subtle, so it kind of blends.


The thing I love about this particular pattern is that there isn't a front and a back to the scarf--it's a big tube.  Is that typical for this type of scarf?  I guess that would make sense with the name "infinity" and all, but I thought that was just because it's a big loop.  The tutorial also mentioned using a different fabric for the front and back, which would look cool too I think.

The one thing that I couldn't figure out from this tutorial (or any of the other ones I looked at online while searching for this info) is approximately how long and wide your pieces should be.  I mean, obviously the size of pieces you can cut will depend on the garment you are repurposing, but some numbers just to get an idea would be nice!  So, here's what I ended up with.  My two pieces were each about 9 inches wide and 54 inches long.  I think that it works well.  I definitely wouldn't go any wider or longer for my taste.  I might go a bit narrower in the future, and I definitely wouldn't worry if I didn't have enough fabric to make it that big.

I can't wait to make one for myself out of this holey cashmere that I love!


Posted by bethanycavanaugh@gmail.com at 1:08 PM