I have made baby legwarmers before, but the first time, I just hacked into a pair of socks and sewed off the ends.  They work, but I don't want anybody looking at them too closely, you know?  So when I found some more cute knee-high socks for $1, I thought I'd give the legwarmers another try. I used the great resources of the internets to find a helpful tutorial, and voila!
Now, there are reasons I don't do tutorials on this here blog.  One of them is that pretty much everything I ever think of wanting to make has already been turned into an online tutorial.  I am not one to reinvent the wheel--I would rather spend my time googling something than trying to figure it out for myself (at least, after I have tried to figure it out myself and failed, that is.)  Like the baby legwarmer tutorial I found here:  very helpful!  But the other reason, as you will see below, is that I am terrible about taking photos of each step as I work.  Once I start a project, I just want to knock it out, you know?

So here are the finished products:  one above, on Little Sister, the other below. 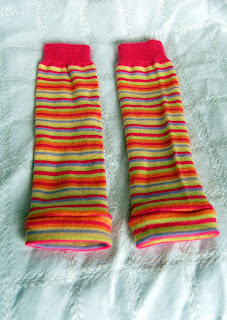 I wanted to put the original sock top (the pink band) at Little Sister's ankle since it's more professional looking, but then the new band I made rolled down on her thighs.  My neighbor, whose children are college-age and hence has no experience with the babylegs phenomenon, expressed some concern that I had dressed my baby in thigh-highs, so I've been turning them the other way and they stay up much better.

My attempt at process photos was that I arranged these scraps before throwing them out and took a picture so that I could show you all what was left of the socks after I made the legwarmers.  If you'd like to know how to do this, visit the link above--it will be much more helpful than I am!
Posted by bethanycavanaugh@gmail.com at 10:33 PM